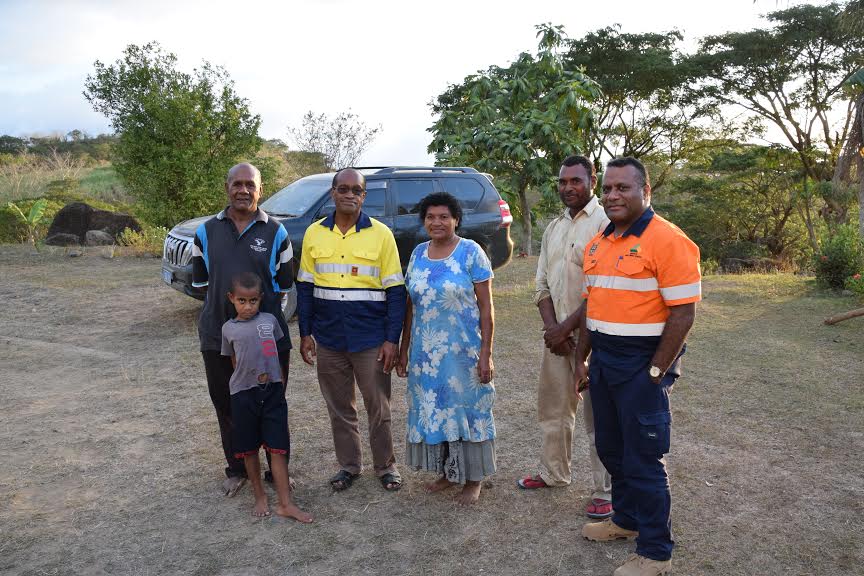 The Minister for Lands and Mineral Resources, Jone Usamate with Ministry staff and Savenaca Matalami and his family. Picture: SUPPLIED

In Malele, Tavua the Mr Usamate approved the issuance of lease for Savenaca Matalami, who has been occupying the 12.8475 hectares of state land in Malele, Tavua for more than 13 years now.

Mr Matalami was involved in a sales and purchase agreement worth $65,000 in 2013 without the Director Lands consent.

He paid off the amount through cane proceeds.

Mr  Matalami than visited the Lands Department in 2013 to enquire about the issuance of his lease, whereby, he was informed that the lease of the said land had expired in 1987.

He was also informed by Lands Department that he was involved in illegal land dealing as the lease had expired.

Mr Matalami since then was trying to get a proper lease for the said land that he was cultivating.

When Mr Usamate visited Mr Matalami’s residence and approved the issuance of lease for the said land, he was overjoyed with the immediate decision made by the Mr Usamate.

“I would like to thank the Lands Department and the Fiji First Government for finally approving my lease,” Mr Matalami said.

Mr Usamate took the time to advise the general public, for any state land dealings, it is very important to visit their nearest lands office for prior consultation to avoid getting involved in any illegal dealings.

He then visited Juxta Beach in Navakai, Nadi, Rokpalm in Denarau, attended a meeting with Vanua Nakovacake, inspected a site visit to Field 40 development progress, Korea Resort and other field inspections.