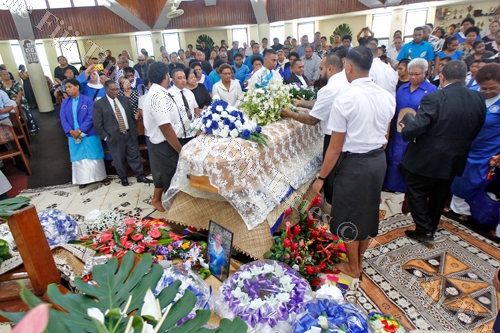 Families, friends and loved ones came in numbers to pay their last respect to the late Deaconess Olovie Kauroto Nataniela during the funeral service at the Churchward Chapel in Suva on Tuesday, June 05, 2018. Picture: JONACANI LALAKOBAU

THE Deaconess Olovie Kauroto Nataniela was widely known in Fiji and recognised for her selfless love and care, especially towards the children at the Dilkusha Girls Home. Deaconess Olovie’s funeral service gathered hundreds of people at the Churchward Chapel in Rewa St, Suva, to pay their last respects.

While delivering his eulogy on behalf of the Tigarea family, Sukamanu Mani said Deaconess Olovie was born in Motusa, Itu’ti’u, Rotuma on November 3, 1938 and was the youngest of nine children.

“Soon after she was born, Olovie was embraced as a grandchild in the family of the late Gagaj Jotam Tigarea, who was the chief of Itu’ti’u and his late wife Sarote Tigarea,” Mr Mani said.

“Sarote Tigarea became a central figure of Olovie’s life from Olovie’s childhood, adolescence, into adulthood. “When her grandmother died, she came to Suva and stayed with the Mani family, Ufufie and Torika Mani who became her adoptive parents in Fiji,” he said.

He said Deaconess Olovie was the first local person to be appointed as the superintendent of the home since its inception in 1904, she served there from 1973 to 1981 and from 1985 to 2010 before she retired a year later.

Mr Mani said although she had wanted to become a nurse, God had other plans for her.

“She joined the Deaconess order in 1965 after returning from a youth convention in Western Australia,” he said.

The Rev David Daniel, in his eulogy regarded the day to be a celebration of her wonderful life.

“What I learned from aunty is, she had a tenacious faith with God, and when she believed God for something she made sure her prayer was not only answered but that God was glorified in that,” Mr Daniel said.

Deaconess Olovie was laid to rest at the Nasinu Cemetery. She was The Fiji Times’ Person of the Year in 2008.