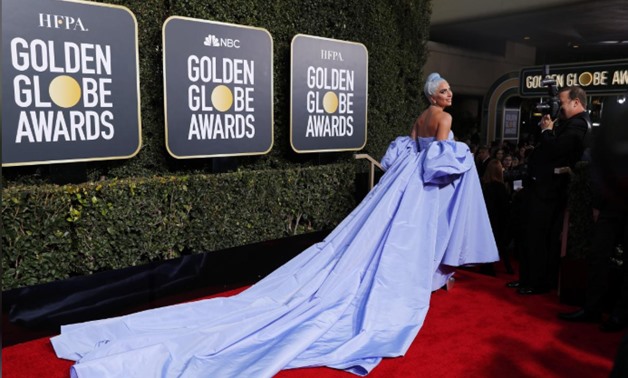 (Reuters) – Bright colors were back on the Golden Globes red carpet on Sunday, with pop superstar Lady Gaga, dressed in lavender, leading a trend for old school glamor.

Lady Gaga, the front-runner for a best drama actress award for “A Star Is Born,” graced the red carpet in a Valentino lavender gown with puffed sleeves and a long train, with her blue-dyed hair pulled into a tight bun, and wearing a stunning Tiffany’s diamond necklace.

“I discovered something working on this film, and it’s something called alchemy, that you are essentially creating a character but you are really becoming the character,” Gaga said about her first role as a lead movie actress.

Gaga’s dress drew a comparison with one worn by Judy Garland in the 1954 iteration of “A Star Is Born.”

Last year’s ceremony saw an all-black look on the red carpet as celebrities showed support for the #MeToo movement that roiled Hollywood.

This year saw blues, golds, reds and lots of metallic, but several stars wore bracelets and pins in support of the Time’s Up movement against sexual harassment and inequality in the workplace.

Glenn Close, who is also vying for best drama actress for her role in “The Wife,” was among the few who opted for darker hues and wore a black gown adorned by a diamond ribbon at the neck line.

Veteran actress Julia Roberts, a frequent suit-wearer on the red carpet, chose black pants and a tan top for the awards, in which she scored her first nomination for a television role for “Homecoming.”

“The Assassination of Gianni Versace” star Penelope Cruz chose dark colors, stunning in a black glittery dress by Ralph & Russo that featured a big bow on the back.

Nicole Kidman, who played a troubled detective in “Destroyer” that has earned her a nomination for best drama actress, appeared in a long burgundy sequin dress.

Both Amy Adams in a shoulder-revealing dark blue gown and Laura Dern in long-sleeved red gown chose vibrant colors for the ceremony, which officially kicks off Hollywood’s awards season.