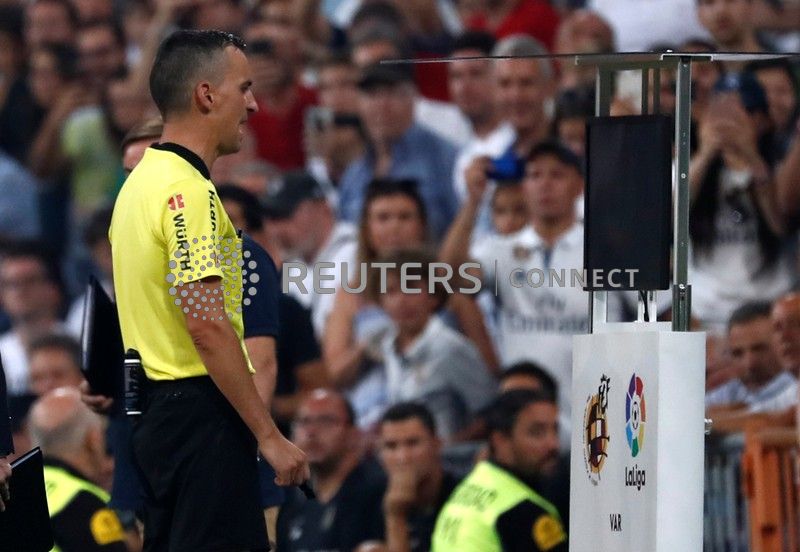 MADRID (Reuters) – The head of Spain’s referee committee on Tuesday hailed the use of video technology (VAR) in La Liga for significantly reducing the number of errors, while recognising they need to ensure officials use the same criteria as each other.

“Overall it has been very positive and we are satisfied with the performance of the referees, the correct decisions and the integration of VAR,” referee’s chief Carlos Velasco Carballo told a news conference.

“The essence of football has not been damaged, the number of interventions and time of revisions has preserved the fluidity of the game. But we still need to work on prevention, aggressive play and unifying criteria.”

Coaches and players have largely welcomed the use of VAR, although it has been called into question recently following controversial decisions in Real Madrid’s 2-0 defeat by Real Sociedad and Atletico Madrid’s 1-0 win over Levante.

Madrid were left enraged when a penalty appeal was turned down without the technology being consulted when Brazilian forward Vinicius Jr. appeared to be tripped in the area.

Levante, meanwhile, issued a strongly worded statement asking for clarification after conceding a penalty for an apparent accidental handball against Atletico which was not reviewed.

The league’s protocol says the technology, introduced for the first time in Spain at the start of this season, should only be consulted when a referee has made a clear error.

“The referee never asks for VAR when he is in doubt, he should officiate as if it doesn’t exist. He only goes to the monitor in subjective plays,” explained Carlos Clos Gomez, the director of VAR.

“The referee can accept VAR’s recommendations or check the play on the screen. The adaptation of VAR in Spain has been positive and quick. But we have to keep working on unifying the criteria, both on the pitch and in the VAR studio.”

Velasco Carballo said the technology has been consulted 30 times to determine whether goals should be allowed to stand, leading to 15 goals being disallowed and 15 being awarded.

Four straight red cards were also shown after the technology was consulted, he added, while conceding that five players escaped red cards due to refereeing errors.

“Our objective is to have zero errors and to make that happen the referees and video referees are going to keep working,” Velasco Carballo added.

“We’ve registered 397 incidents in the penalty area according to our analysis. Penalties were awarded in 56 plays, 26 errors were made, and 19 of them were corrected by VAR. So we’ve reduced the margin of error to 4.79 percent thanks to VAR.”