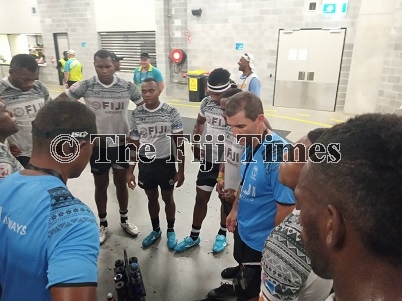 The Fiji 7s team in a hurdle after the match against Kenya. Picture: JONACANI LALAKOBAU

FIJI 7s coach Gareth Baber has an early opportunity to test the teams capacity ahead of the HSBC Los Angeles 7s with a scrimmage session against Australia early tomorrow morning.

‘’We are playing against Australia tomorrow to judge ourselves and test some of our set-pieces ahead of the LA 7s,” Baber said.

The national team is eager to make its mark at the new venue in the United States as the HSBC World Rugby Sevens Series leg returns to Los Angeles after 14 years.

Baber said there was excitement in the camp and at the same time complete focus for the two day tournament.

‘’We know about the size of Los Angeles and we know all teams will be in a process of finding a little bit about what the tournament will be like in LA.

‘’We need to be flexible which we have talked about as a team.”

Fiji is pooled with invitational side South Korea and ever improving Argentina and France.

Fiji takes on South Korea at 6.51am on Sunday, then faces France at 9.47am before battling it out against Argentina at 1.05pm.

NZ 7s: Fijiana off to a great start

Flying Fijians present itatau before departing for the RWC