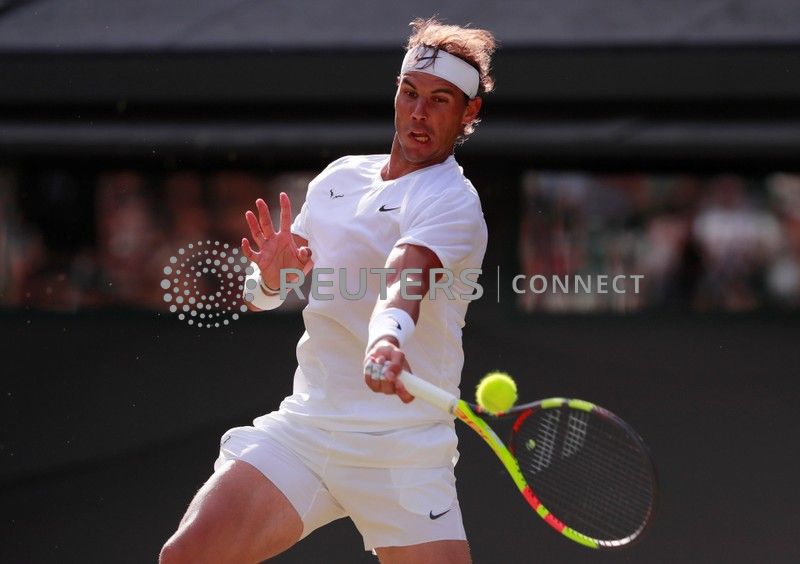 LONDON (Reuters) – Having labelled Rafa Nadal “super salty” and “gracious only when he wins”, Nick Kyrgios is not expecting to go to the pub with the Spaniard after their second-round meeting at Wimbledon on Thursday.

Both players won their first-round matches on Tuesday in typically contrasting fashions, with Nadal cruising through in straight sets with trademark professionalism, while Kyrgios came through a five-set entertainment blockbuster.

That teed up an enticing encounter between the pair, whose rivalry has stemmed from a war of words in which Nadal accused the Australian of “lacking respect” while Kyrgios fired back with typical invective.

Asked on Tuesday how well he knew Nadal, Kyrgios said: “Not sure that me and Rafa could go down to the Dog & Fox (pub) and have a beer together. I don’t know him at all. I know him as a tennis player… we have a mutual respect but that’s about it I think.”

Kyrgios has never been afraid to ruffle feathers in the locker room and ripped into Nadal in May in a feisty podcast, in which he also said world number one Novak Djokovic had a “sick obsession” with being liked.

Nadal already had a tense relationship with Kyrgios, accusing him of “lacking respect for the public, the opponent and himself” after being beaten by the Australian at the Mexican Open in March.

Kyrgios did seek to tone down the rhetoric somewhat on Tuesday, heaping praise on Nadal’s ability on court.

“He’s one of the greatest tennis players of all time. I go into that match as an unbelievable underdog,” Kyrgios said.

“I know if I play the right type of tennis, I can have success against him. I have to come with the right attitude, I have to be willing to fight. If not, it’s going to be butter for him, he’s one of the best tennis players.”

Perhaps the most remarkable side to their rivalry is that Nadal, the former world number one with 18 Grand Slam titles, has not got the upper hand on the Australian, ranked 43, on court where they are tied 3-3 in matches between them.

In their only previous meeting at Wimbledon, Kyrgios announced himself to a global audience with a thrilling four-set victory in 2014.

Should he repeat the trick, he would rub salt into some already ‘salty’ wounds.