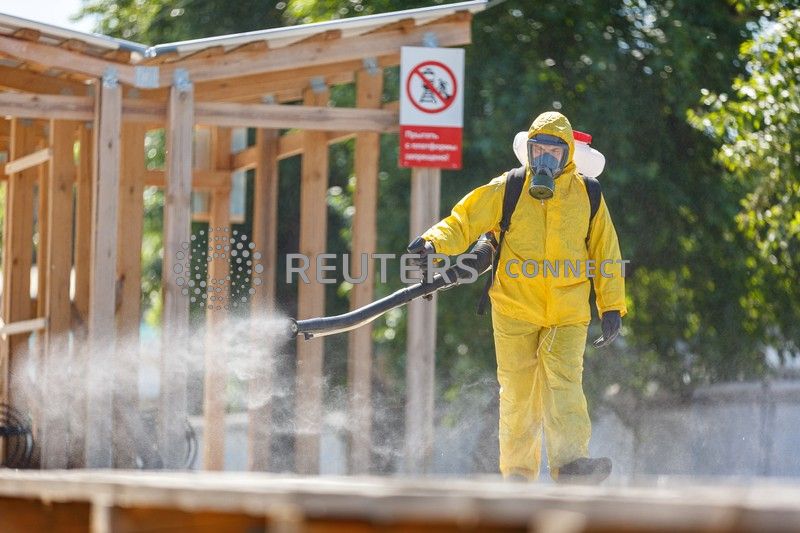 FILE PHOTO: A specialist wearing personal protective equipment (PPE) sprays disinfectant while sanitizing the Rizhsky Railway Station, one of the measures to curb the spread of the coronavirus disease (COVID-19), in Moscow, Russia June 17, 2021. Moscow Division of Russian Emergencies Ministry/Handout via REUTERS

MOSCOW (Reuters) – The Kremlin on Friday blamed a surge in COVID-19 cases on reluctance to have vaccinations and “nihilism” after a record 9,056 new infections in Moscow, mostly with the new Delta variant, fanned fears of a third wave.

Moscow Mayor Sergei Sobyanin extended restrictions he had imposed this month, which include a ban on events with more than 1,000 people, an 11 p.m. closing time for restaurants, and the closure of fan zones set up for the European soccer championship.

He had said earlier this week that the situation in the capital, home to 13 million people, was deteriorating rapidly.

“According to the latest data, 89.3% of Muscovites (recently) diagnosed with COVID-19 have the mutated, so-called Delta or Indian variant,” the news agency TASS quoted Sobyanin as saying on state television.

Moscow accounted for more than half the 17,262 reported across Russia.

Asked to explain the surge, Peskov blamed the virus’s “cunning nature” – a reference to its mutations – as well as “total nihilism, and the low vaccination level”.

At a briefing, he rejected suggestions that Russians were reluctant to have vaccinations because they distrusted the authorities.

Russian Deputy Prime Minister Tatiana Golikova, a member of the coronavirus task force, said in televised comments that 16.1 million Russians have been inoculated with both components of COVID-19 vaccines as of June 18.

She said that 19.7 million have got at least the first dose of the vaccines: at one-seventh of the population, that is far less than in most Western countries.

Golikova urged Russians to get re-vaccinated after 6 months from the previous vaccination.

She also said that the Russian government has decided “it was expedient” to resume flights to Turkey from June 22 amid the improved COVID-19 situation and oversight there, after restrictions had been introduced in May.

Flights to some other countries, including the United States and Belgium would also be resumed later this month, she added.

Central Election Commission head Ella Pamfilova said voting in this autumn’s parliamentary election would be extended, largely because of the pandemic, to run over three days, from Sept. 17-19, rather than one, the Interfax news agency reported.

Moscow authorities this week said anyone working in a public-facing role must have a vaccination, and on Friday they said anyone who had not been vaccinated would be refused non-emergency hospital treatment.

Sobyanin said it was now even vital to start administering further boosters – in effect, a third dose. He said he himself had just received a top-up, after being fully vaccinated a year ago.

The third doses being offered are a repeat of the first dose of the two-shot Sputnik V vaccine, he said.

Several Russian officials and members of the business elite, as well as some members of the public, have already been securing third and fourth doses of Sputnik V, Reuters reported in April.

The question of how long a vaccine offers protection against COVID-19 will be vital as countries gauge when or whether revaccination will be needed, and Russia’s findings will be closely watched.