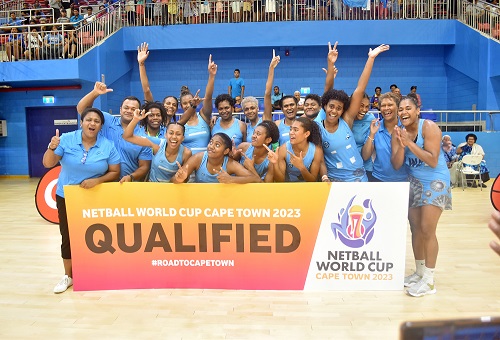 It’s a big relief for Netball Fiji to be able to be part of the Netball World Cup in Cape Town, says chief executive officer Vivian Koster after the Fiji Pearls defeated the Cook Islands 51-34 at the Vodafone Arena in Suva yesterday.

The win cemented Fiji’s place in the World Cup which the Unaisi Rokoura-coached side will be attending with Tonga.

“So first up, we’ve already got the place,” she said.

“The players were fighting their hearts out to make us proud.”

She said moving on to the next step of preparation, the PacificAust Sports Series would be in October on the Sunshine Coast in Australia and they would use the tournament to gauge the players that were in their pool.

“So in December, Singapore has invited us to take part in the Nation’s Cup in the new year,” she said.

“We’re looking at actually hosting some teams here in Fiji and also just touring, having a training tour to prepare our players for Cape Town.

“The fact that South Africa is literally a year away, it’s in July of next year, we need more game time.”

She said the inclusion of some experienced players such as Afa Rusivakula and Maria Lutua-Rusivakula boosted the confidence of the newbies in the side.

“They’re able to be in the position of having to fight, to do a comeback in a game and so they bring that knowledge and skill to any team. So the combination is always good.”

She said Fiji Netball’s ommission from the Commonwealth Games was a driving factor for the sport.

“The non-inclusion has been the fact that we haven’t been able to play for two years,” she said.

“To up your ranking in netball, you have to play international Test matches. And we haven’t been able to do that and that’s the only reason we’re not there. So in the Commonwealth, it’s the top 12 or this the top 11 plus the host if the host is already in the top 12, then a 13th team.

“So we in the Pacific missed out. That says something about our competition, that even though we haven’t played for two years, we still maintain our world ranking of 14. Of course, that’ll all change at the end of this month when the new rankings will be released.