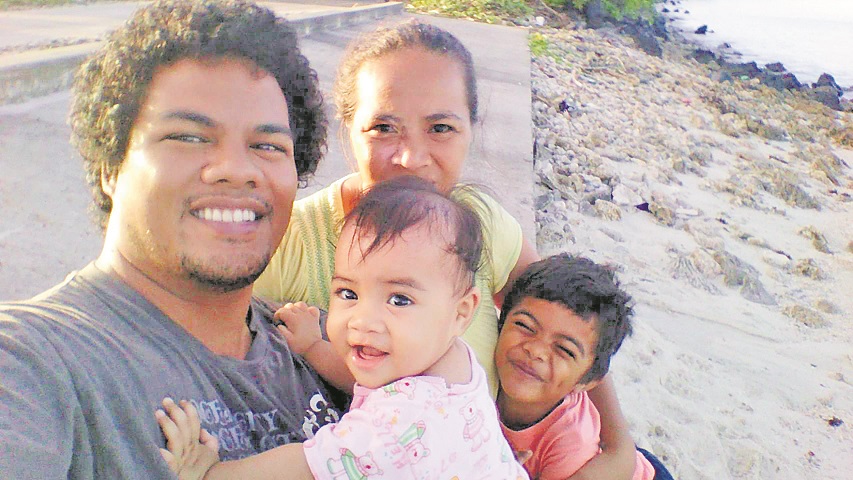 Simon Kofe, the youngest Tuvalu MP, with his family in Funafuti, Tuvalu. Behind them is a damaging effects of climate change to the small Pacific Island nation. Picture: SUPPLIED

POLITICS is not often the realm of the young.

More often than not, it is the playground of those who have chalked up a few decades of public life experience and learnt how to go through debate and rhetoric.

And then in steps the likes of Simon Kofe.

At 36, he is the youngest member of the Tuvalu Parliament.

Truth be told, Mr Kofe had no plans to enter the political arena any time soon, he had hoped to put up his hand after retirement.

He shared with this newspaper that it was not his intention to engage in politics at an early age and his focus had always been justice and the law.

But something stirred in his heart and the Tuvalu native decided to use his vast knowledge of the justice system to contribute effectively to his island nation which is currently in the throes of the effects of climate change.

“I was a senior magistrate and the current Constitution review was a primary motivation for me to join politics,” Mr Kofe said.

“I thought politics was going to be something down the track, probably after I retire.

“But my own personal judgment of the time that we are in, I thought this will be a good time.

“I came to the decision by just looking at the impacts of what we are going through right now in Tuvalu and our bleak future.

“I felt I could contribute better to my country by doing this.”

Mr Kofe attended Marist Brothers Primary School in the early ‘90s when his father was a lecturer at the University of the South Pacific.

He then moved with his family to quite a number of countries around the Pacific region and attained his secondary education along the way before returning to the USP to attain his Bachelor of Law certificate.

Returning to Tuvalu was something he had always looked forward to especially after seeing the devastation caused by the effects of climate change to the 26 kilometre island chain of coral atolls that he calls home .

After completing his Masters in International Maritime Law in 2014, he was on fire and was determined to do more for his people and last year’s by-election saw him make the move into politics, making him the youngest Tuvalu member of Parliament to date.

Although he sits in the Opposition, he believes the time was right for him to contribute towards the growth of his island nation.

At the recent Pacific Islands Forum meeting, Mr Kofe said while the outcome of the meeting was probably not the ideal solution, he was hopeful that the major push by Pacific leaders at international level could bring justice to his fellow Tuvaluan islanders.

“I think there has to be a balance in our approach especially in dealing with issues such as climate change as this is something that is really beyond our control.

“I am of the view that we should invest more of our time into the things that we have the power to change so I guess there is a balance in our advocacy on the international platform, but we also locally need to look at what we can do. It’s important for us to focus on those things.

“The outcome of the meeting in Tuvalu is probably not the ideal solution for us seeing Australia taking a strong stance against us.

“We are living in interesting times so let’s wait and see how the development is moving forward.”