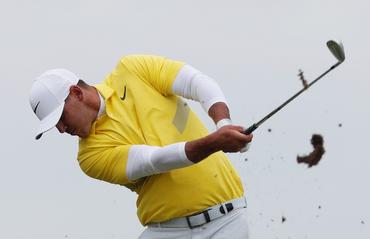 Sports News October 4, 2019 / 10:38 AM / Updated an hour ago Koepka healthy again after stem cell treatment but game rusty 3 Min Read (Reuters) - Brooks Koepka is healthy again but his game was ailing as he shot a mediocre one-under-par 70 in his first start of the new PGA Tour season at the Shriners Hospitals for Children Open in Las Vegas on Thursday. FILE PHOTO: Golf - The 148th Open Championship - Royal Portrush Golf Club, Portrush, Northern Ireland - July 21, 2019 Brooks Koepka of the U.S. on the 3rd hole during the final round REUTERS/Paul Childs

(Reuters) – Brooks Koepka is healthy again but his game was ailing as he shot a mediocre one-under-par 70 in his first start of the new PGA Tour season at the Shriners Hospitals for Children Open in Las Vegas on Thursday.

A day after revealing he had undergone stem cell treatment on a troublesome left knee, Koepka was far from his best at TPC Summerlin, trailing early Canadian leader Nick Taylor by seven strokes.

The 29-year-old world No. 1, whose rust was evident, ran up five birdies and four bogeys.

“Finally feel 100%, which is nice, and hopefully stay that way for the rest of the season,” he said. “I’d been battling it there for the last four months of that season.

“My patella tendon was partially torn … I also had a wrist injury.”.

Those concerns did not stop Koepka from a magnificent season in the majors. He won the PGA Championship, was runner-up at the Masters and U.S. Open, and fourth at the British Open.

Makes one wonder what he can do in 2020 if he can put in some time on the range.

“Last year I didn’t practise at all,” said the American. “I finally feel good enough where I can actually practise and feel prepared coming into golf tournaments. I’ll be practising this year.”

Koepka, an especially dangerous competitor when he has a chip on his shoulder, was controversially beaten for PGA Tour Player of the Year in a vote by his peers.

Never mind his major record, Koepka was bested by season-long FedEx Cup winner Rory McIlroy. The tour did not reveal the vote totals.

Koepka shrugged off the snub, making a comparison with the NBA’s dominant player of the past decade.

“LeBron (James) has only won four MVPs (most valuable player awards) and I’m pretty sure he’s been the best player for more than just four years,” Koepka said.