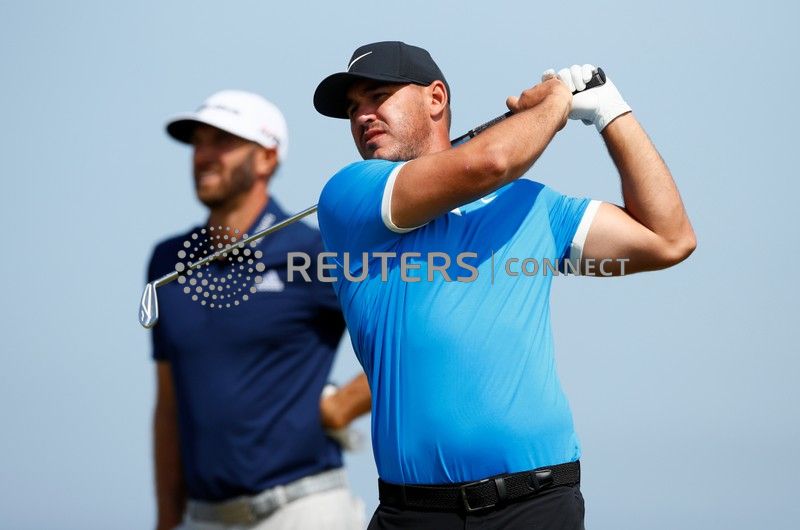 American Brooks Koepka believes he has a “big advantage” in this week’s British Open in the form of his local-born caddie who grew up playing on Royal Portrush.

Such is four-times major  winner Koepka’s belief that caddie Ricky Elliott can give him valuable “inside info” on the course that he even ignored a practice round invitation from Tiger Woods.

Elliott was a promising young amateur player, winning the Ulster Boys’ and Ulster Youths’ Championships but struggled when he turned professional and switched to caddying in the U.S.

But he remains a well-known figure in Portrush and while he has spent the past six years travelling the world on Koepka’s bag, his parents Pat and Martha still live in the town and his brother Peter is the owner of a golf shop in nearby Coleraine.

The Open is being held at Portrush for the second time — 68 years after the only other occasion the Northern Ireland venue held the major.

That means few players have the intimate knowledge of the links course that Elliott possesses.

“Luckily my caddie has played this golf course I can’t tell you how many times, so that’s a big advantage,” Koepka told a news conference on Tuesday.

“Every hole I just step up on, (I say) ‘You tell me what to do, you’ve played it more than anybody.’ So just let him figure it out.”

Woods, who has never played Portrush, said he had tried to set up a practice round with Brooks but got nowhere.

“I texted Brooksie, congratulations on another great finish. What he’s done in the last four major championships has been just unbelievable. To be so consistent, so solid,” Woods said.

“And I said, Hey, dude, do you mind if I tag along and play a practice round? I’ve heard nothing,” he said with a grin.

Koepka may have won four majors in the last two years, including a second straight PGA Championship at Bethpage Black in May, but he said the large crowds at practice have been more focused on his hired help.

“I probably hear more, ‘Ricky! Hey, Ricky, what’s going on?’ than anything. I’m sure he’ll have quite a bit of friends and family out. It will be a special week for him, for sure,” he said.

It would be even more special if he happened to pick up the bonus for Koepka’s first Open.

“And to be caddying and to be able to win one here would be — he’d be a legend, wouldn’t he? He already is. But it would be cool to see him win.”