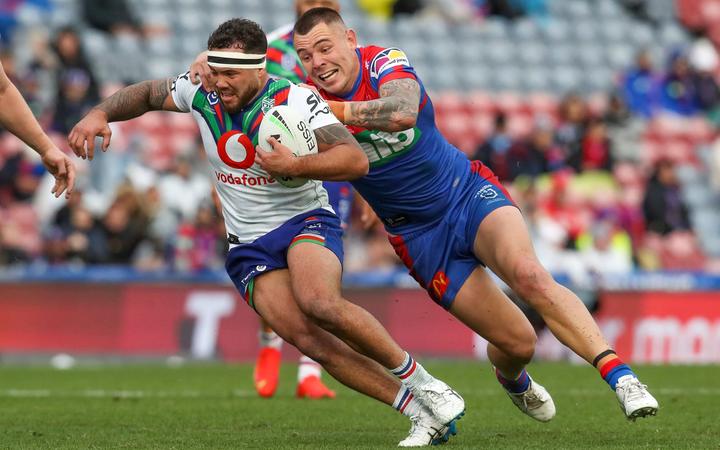 The Warriors have slumped to their third straight NRL defeat.

They have been beaten 10-6 by the Knights on a wet afternoon in Newcastle, coughing up a 6-4 halftime lead.

The Warriors remain 11th on the NRL ladder, two points outside the top eight.

Centre Euan Aitken scored what turned out to be the Warriors’ only try in the 25th minute, picking up a loose ball and running 80 metres to score in the right hand corner. Reece Walsh converted with his first kick at goal in the NRL to give them a 6-0 lead.

It took the Knights just five minutes to reply, with with Lachlan Fitzgibbon scoring to the left of the uprights after brushing off Warriors back-rower Eliesa Katoa. Jake Clifford sprayed the conversion wide to keep the score at 6-4.

Fitzgibbon went from hero to zero for Newcastle when he was sin-binned in the 34th minute after collecting Kodi Nikorima in the head with a stray arm.

But the Warriors couldn’t capitalise on their numerical superiority either side of halftime.

The Knights leveled the scores at 6-6 in the 52nd minute when Clifford kicked a penalty, but both sides continued to struggle on attack.

Walsh attempted to break the deadlock with his boot, attempting a couple of field goals in the last half a dozen minutes.

His first was charged down and his second sliced wide of the uprights.

Newcastle then went down the other end of of the field and scored in the left hand corner through centre Brodie James. Clifford missed the conversion but it didn’t matter as the Knights held on for a 10-6 victory.

The Warriors finished the match with 12 men with Ben Murdoch-Masila sin-binned for a high tackle in the 79th minute.