Knife-edge? UK’s Johnson ahead but polls suggest majority might be tough 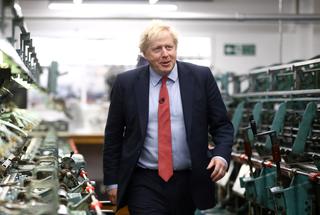 LONDON (Reuters) – Prime Minister Boris Johnson is heading into Britain’s election next week with a lead in opinion polls, but some of the surveys also suggest that his chance of winning a parliamentary majority could be too close to call.

Four opinion polls published on Saturday put the lead of Johnson’s Conservative Party over the main opposition Labour Party at between eight and 15 points, five days before the Dec. 12 national election.

At the lowest end of that range, Johnson cannot count on winning the majority in parliament he needs to take Britain out of the European Union by Jan. 31, especially if voters choose to put aside their usual allegiances to vote tactically over Brexit.

Polling firm Savanta ComRes said Johnson’s lead over Labour had shrunk to eight points from 10 in a previous poll published on Wednesday – the tightest margin of Saturday’s four surveys.

Its head of politics, Chris Hopkins, said the final few days of the campaign could be crucial.

“The margins are incredibly tight,” he said. “The Conservative lead over Labour dropping or increasing by one or two points could be the difference between a hung parliament and a sizeable Conservative majority.”

The election pits Johnson’s plan to get Brexit done next month against Labour’s call for a second referendum on a new Brexit deal under its veteran socialist leader Jeremy Corbyn.

Opinion pollsters were embarrassed by Britain’s last election in 2017, when they under-estimated the size of Labour’s support which cost previous prime minister Theresa May her majority and threw Brexit into chaos.

They also failed to predict the victory of the Leave campaign in the 2016 EU membership referendum.

However, one poll, published before the 2017 election, by YouGov, was more accurate in predicting the number of seats won by each party.

Known as an MRP poll – an acronym for its Multilevel Regression and Post-stratification model – it predicted 93% of results in individual constituencies correctly.

The Sunday Times said a poll by Datapraxis, also using the MRP model and based on 500,000 online interviews, predicted that Johnson would win a majority of 38 in parliament next week, down from a projection of 48 two weeks ago.

“We have never seen as many undecided voters this late in the campaign,” Datapraxis boss Paul Hilder said. “As many as 80-90 constituencies are still up for grabs. A much larger Conservative landslide is still possible – but so is a hung parliament.”

YouGov said last month that its MRP model suggested the Conservatives were on course for a majority of 68. YouGov will publish an updated version of the poll on Tuesday.