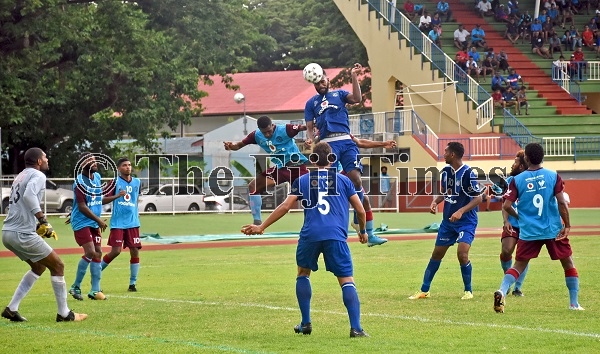 Lautoka's Sekove Finau climbs high for a header against Nasinu during their match at Churchill Park in Lautoka. Picture: REINAL CHAND.

KIWIS Liam Anderson and Jack Caunter will boost the Vodafone Lautoka team during the 2020 Oceania Football Confederation (OFC) Champions League which kicks off in Vanuatu tomorrow.

Anderson, who has represented Waitakere United and Auckland City previously, will play a vital role under the crossbar for the Blues following the departure of experienced goalkeeper Benaminio Mateinaqara to Ba last month.

Caunter has also represented Waitakere United in the ISPS Handa Premiership and will strengthen the defence. Lautoka will play Vanuatu champions Malampa Revivors in the opening match at the Luganville Soccer City Stadium at 4pm.

Lautoka football head coach Anand Sami said they would treat each team with respect as the OFC Champions League was a higher level competition. He said their preparations could have been better given more time.

The former national rep said the preparation period for any tournament should be six weeks. “Looking from my experience the preparation for the OFC Champions League needs to be higher than what it is at the moment,” Sami said.

“We not could get the whole team to assemble together. We could have trained twice a day and had bit more friendly games to gauge the preparation level just to see how the players perform.

“The preparation should have started earlier. The morning sessions would have been more tactical work and afternoon would have been physical. I would have liked to take the team out to play more games and adapt to the different atmosphere.”

“There is a first cycle in football and it is a good six weeks preparation for the first game,” he said.

“That is when you can build the players physically and their mental toughness.

“I respect all the opponents and I understand that they have recruited some players who play semi-professional football in other countries.

“We also have registered some players from outside but they have not played together as a unit.”