Kini the hairstylist and icon 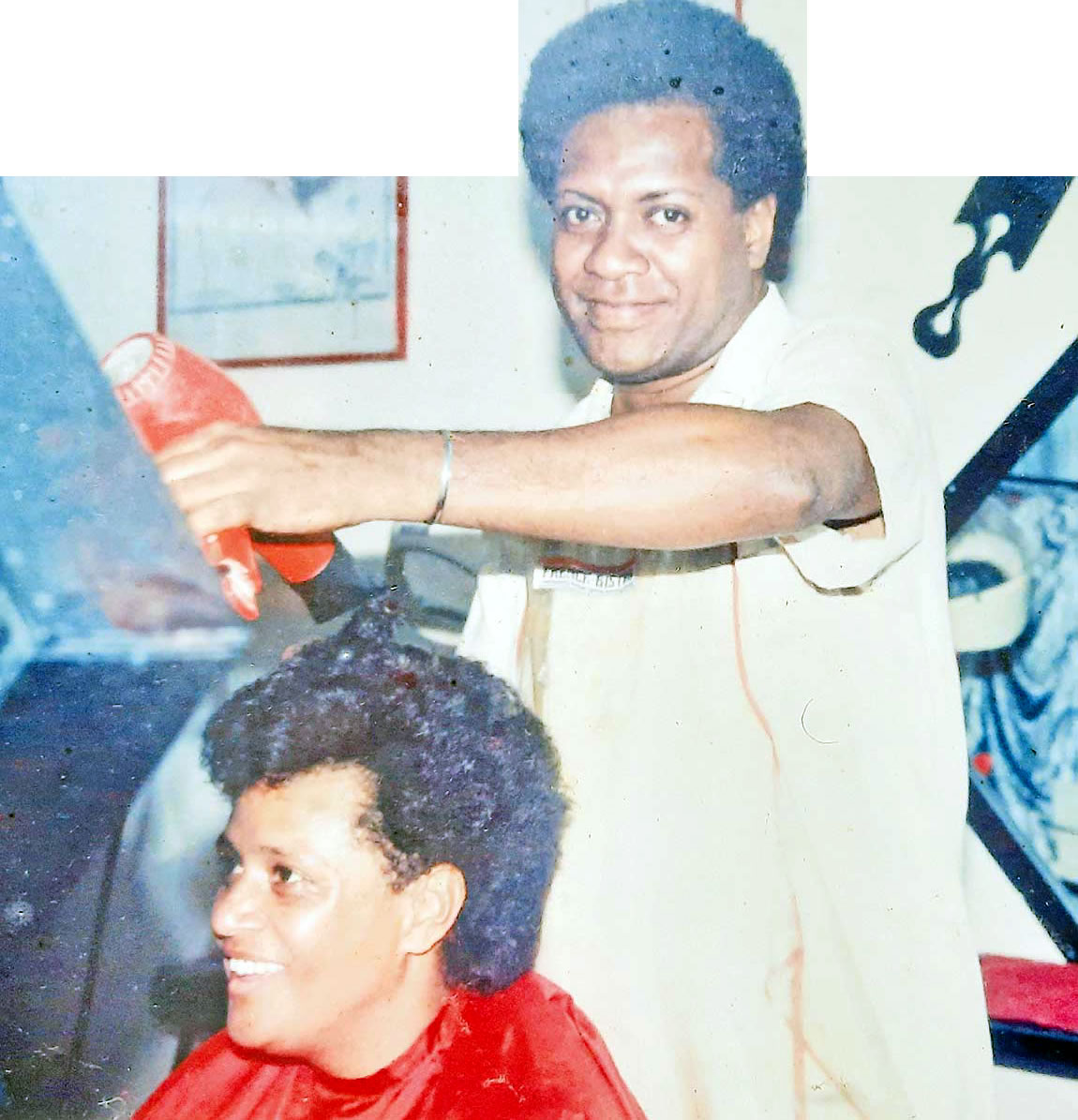 The trick of the trade did not come easy but Kini said he was grateful for one person in particular for showing him the ropes. Picture: SUPPLIED

Fiji lost one of her most renowned hairdressers in Ratu Kiniviliame Koroi last week. When you talk about Fijian icons, Kini, as he was fondly known, was larger than life.

This writer had the opportunity to speak with him just before he passed away. His story is an inspiration to us all.

Kini’s love affair with hair began way back in the 1970s.

And if you ask anyone who was in sync with the fashion and beauty trends back then, they would probably remember Kini because of his skill and also because of his personality.

The Maumi, Bau, Tailevu native said his first career choice was as far removed from hairdressing as chalk and cheese.

“I first started doing hair in 1975, that’s when I left school. I was a dropout from Nasinu Teachers College,” Kini said.

“I didn’t complete my teaching studies because I was influenced by my peers.

“So I dropped out and I was looking for a job and chanced upon an opportunity at Lorena’s Beauty Salon at Victoria Arcade as an assistant.”

The salon belonged to Lorena Smith and was one of only three in Suva at the time. The other two being Max of Melbourne and Flairs Salon.

“I started there as an assistant, so that meant going on errands around town, sweeping and cleaning the flooring, washing hair and doing other small but necessary tasks in a salon.

“When I started, I already had an interest in doing hair, especially ladies hair, so Lorena started teaching me how it was done.

“It wasn’t until 1976 that she actually let me touch ladies hair. She had to take me through all the basics of doing hair first until she was confident that I was up to the task.

“From there I started and slowly began building myself up by learning about new trends and styles and things.”

The trick of the trade did not come easy, but Kini said he was grateful for one person in particular for showing him the ropes.

“I really learnt a lot too from Mervin Doughty, he also worked at Lorena’s. He really took me under his wing and I’m really grateful for that.”

Kini did not just learn on the job, he took it upon himself to get certified and became an internationally accredited hairdresser.

“There were some who had already gone overseas to train in hairdressing — some to Hawaii, some to Australia, but I went to New Zealand and I was trained by Wella International.”

Kini said there were two things that gave him personal satisfaction.

One was gaining international training and certification and the other was being trusted enough to handle the hair of generations within one family.

“I have dressed the hair of two or three generations in a single family over the years. Mother, daughter and granddaughter and they still come around to this day.

“I have friends all over the world that would come and see me when they could visit. I have been doing this for over 40 years you know.”

Kini said he was amused at the things that developed into trends and became “fashionable” over the past four decades.

“The ’70s was a really popular time for shaggy haircuts, ladies with straight hair would come in to get perms for afros and afro styles.

“In the ’80s we had the Lady Diana cut, as soon as her photos would appear in the papers the ladies would run to us with the photos and ask for that hairstyle.”

Kini said hairdressers and salons were few and far between in the days preceding the ’70s.

“Before hairdressers were very hard to find, there were a few trained ones from overseas who were around besides the new ones coming up.

“But before the ’70s it was hard to find hairdressers and there were hardly any salons anyway.”

Kini said 1982 was a big year for him because he moved from working in to coowning a salon. The move eventually led to him opening his own beauty parlour.

“In 1982 the owner sold the business and moved to Hawaii, so me and Koto Vakarewakobau took over Lorena’s.

“Later on we sold the business and went our separate ways, I joined other companies, but in 1996 I opened my own salon.

“I figured I had worked for others for long enough and it was about time I used my experience and skills to make some money for myself.

“So in 1996 I opened Kinny’z Hair Design for His n Hers, in Dominion Arcade.”

Kinny’z was open for business and stayed on the ground floor of Dominion House well beyond 2010.

“I was at Dominion Arcade for 17 years and then moved in 2013 to this shop in Parade Arcade.”

As time passed by, more and more salons have come and gone but Kinny’z has remained a mainstay in Suva City. He said after 25 years in business, he must be doing something right.

Kini said sometimes new establishments caught the eye and people naturally gravitated towards them. But sometimes, he said, they could be scary.

Reflecting on changes he has seen over the past 40 odd years, he called on people to be careful with who they let play with their locks.

“These days everywhere you go there is a salon, which is good. “But the hairdressers and not well trained like how we were before.

“Even the hairdressers that come from overseas, we don’t really know if they are truly qualified to dress hair.

“Our hair is delicate, if you use hair products for a different hair type you can really damage your locks.

On Tuesday, April 13, Kini passed away peacefully in his sleep. He was most probably one of the most senior and respected hairdressers in the country.

But for those who knew him well and had the pleasure of sitting in his chair, they had lost a great friend, compatriot and confidant.