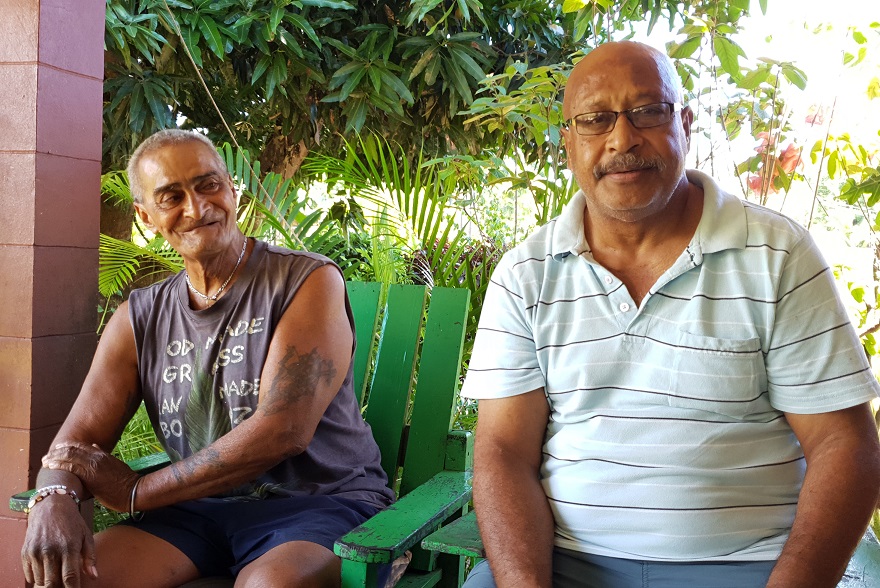 John King (left) with George Moore share about their experiences at Raymond's in the 70s. Picture: FELIX CHAUDHARY

JOHN King still remembers the scene at Raymond’s Nightclub, Lautoka, in the 70s like it was yesterday.

People from all over the Sugar City would gather there on weekends to dance their worries away.

“It was a very different time to what Lautoka is now,” the 65-year-old shared.

“People would work hard at the sugar mill or in whatever business they were in and come to Raymond’s just to dance all that tiredness away.

“It didn’t matter who you were or where you were from — at Raymond’s we were all there for one reason — just to relax.”

In the mid-70s, male patrons to Raymond’s would not be granted entry in shorts.

“If you didn’t have long trousers then forget about coming in.

“So people used to come up with all kinds of fancy ideas about how to get in.

“And because the drummer was sitting at road level with a window behind him, he used to get harassed all the time.

“They would come up behind him and ask him for his long trousers.

“After taking it off, he would play in his underwear until the friend who managed to come inside would return it to him.

“But what used to happen sometimes — the person who borrowed the long trousers would forget to hand it back and the poor drummer would spend most of the night playing drums in his underwear.

“And in between the songs, we could hear him calling out to the person wearing his long trousers to give it back.”

“At the time, I was a left-handed player and played the guitar upside down. “George advised me to learn to play right-handed and I did that and it helped me with my playing.”

One of John’s most memorable gigs was performing for Prince Tui Teka during the Maori singing superstar’s Fiji tour in 1976.

“He was a big superstar at that time and being chosen to play bass for him was a big deal.”

John got his first chance at lead vocals when George emigrated to the Land Down Under.

“We all sang backup and when George left for Australia in the mid-70s, I began singing too.

“It was a good learning experience working with him because he was very professional.

“When George migrated, Coco Emberson joined the band and I also picked up a lot of things from him and when I moved from bass to guitar, George Moore took over as bass player.

“But at the end of the day, I had also developed my style by then and the experiences with George and Coco just gave me a bit more depth in my playing.” Apart from performing in Lautoka, John also spent two years backing Fijian music icon Sakiusa Bulicokocoko at Bala’s Nightclub, Ba, also in the 70s.

“I have never played with another musician like Sakiusa, “He had everything — a driving rhythm, melodic notes, good feel and amazing tone in his voice.

“He was a one in a million musician.”

While John’s music career began to take shape at Raymond’s in the 70s, the genesis of his musical journey began in the mid-60s with a band called the New Pretenders.

Here, he learnt the finer things on the guitar courtesy of his uncle, Robert Southey.

“With the New Pretenders, I played at the Trio, United Club and almost all the big venues in Suva at that time.”

His advice to up-and-coming musicians is “to be yourself”.

“Practise so that you know your instrument well and how far you go, never forget where you came from and always share what you have learnt.”