Kings defeat Islanders to break even on homestand 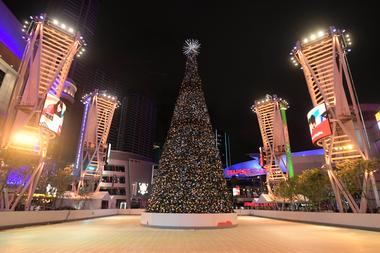 Nov 27, 2019; Los Angeles, CA, USA; General overall of Christmas tree in front of the the Staples Center before the NHLgame between the Los Angeles Kings and the New York Islanders. Mandatory Credit: Kirby Lee-USA TODAY Sports

Jonathan Quick had 24 saves as the Kings won for just the second time in their last five games and earned the victory after losing consecutive games at home.

The Kings won their sixth home game this month to tie a franchise record for November. They have a chance to break the record when they host Winnipeg on Saturday.

Derick Brassard scored a goal for the Islanders, who not only saw their 17-game point streak end Monday at Anaheim, they lost all three games in their trip to California.

The Islanders had eight comeback victories during their point streak, but could not rally after the Kings took the lead for good late in the second period on Carter’s eighth goal of the season.

Carter moved across the front of the Islanders goal and was able to redirect a shot from Michael Amadio and into the net past Islanders goalie Semyon Varlamov while on the power play at 16:17 of the second period.

The Islanders grabbed an early 1-0 lead when Brassard scored at 8:42 of the first period. His shot from the right point through traffic hit Quick in the chest, and took a tricky hop in front of him before bouncing past him on his left side. The goal was Brassard’s seventh of the season.

About one minute after the Islanders took the lead, the Kings tied the score when Brown scored from a sharp angle near the left corner. Brown’s shot went just past Varlamov’s left ear, hit the cross bar, rebounded off the right post and into the goal.

Roy put the Kings up two goals in the third period when he one-timed a shot from the slot off a pass from Blake Lizotte and sent a wobbling puck past Varlamov’s right arm for his second of the season. Iafallo scored his fifth of the season into an empty net with 2:07 remaining.

The Kings finished 2-2 on a just-completed four-game homestand, when they also defeated the Edmonton Oilers. The Islanders went 0-2-1 on their three-game trip to San Jose, Anaheim and Los Angeles, while falling to 6-3-1 on the road this season.