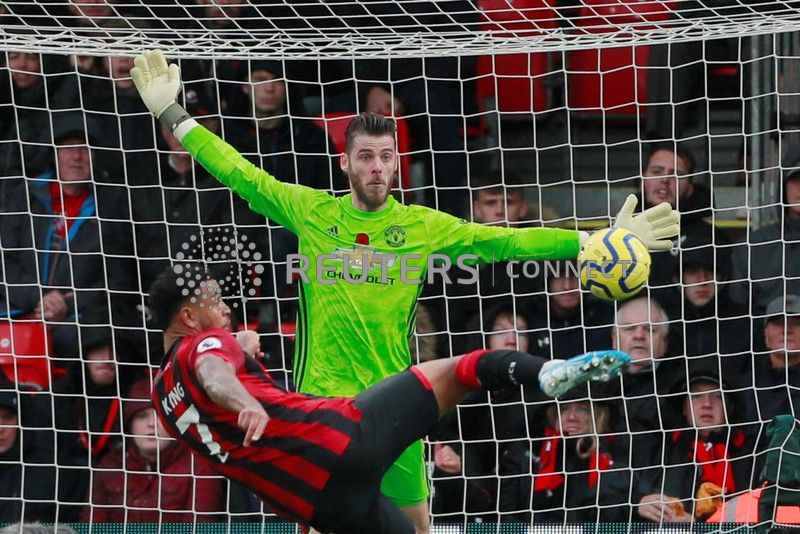 BOURNEMOUTH, England (Reuters) – Manchester United’s revival came to a disappointing end as Bournemouth forward Joshua King’s goal on the stroke of halftime earned a 1-0 victory on a blustery south coast on Saturday.

King volleyed in from close range as Bournemouth scored their first Premier League goal for more than a month.

Victory lifted Eddie Howe’s side above United into sixth place in the table with 16 points from 11 games ahead of Saturday’s later kickoffs.

United had won three successive away games in all competitions but despite starting and finishing strongly against Bournemouth they could have few complaints at the defeat.

They did raise the tempo in the closing stages with Mason Greenwood hitting the post with a volley immediately after coming on as a substitute but Bournemouth held on.

United have still not won back-to-back Premier League games since Ole Gunnar Solskjaer was named permanent manager in March and their haul of 13 points from 11 matches represents their lowest total since 1986-87.

“We are disappointed but when you come to places like this you have to take control of the game,” Solskjaer said.

“We have to win games like this. We are disappointed. We have to look forward now though.”

With wind and rain lashing the Vitality Stadium, United actually had a spring in their step and Daniel James was causing havoc in the Bournemouth defence with his pace.

His run and cross should have seen Fred give United the lead and the Welshman also provided a chance for Andreas Pereira but he blazed a powerful shot over the crossbar.

United’s Anthony Martial was then shouldered off the ball by Jefferson Lerma but his appeals for a penalty were waved away, prompting tempers to flare.

King broke the deadlock just before the interval.

Receiving the ball on his chest with his back to goal, the Norwegian flicked the ball up and over Aaron Wan-Bissaka before spinning past the bemused United defender to volley home.

It stretched United’s run of Premier League away games without a clean sheet to 11.

Bournemouth were content to play on the counter-attack in the second half but still looked the more dangerous with De Gea making a superb low save to deny Harry Wilson.

Solskjaer sent on teenagers Greenwood and Brandon Williams for James and Wan-Bissaka late on but Bournemouth defended tenaciously to keep a third successive clean sheet.

“It was very good today,” Howe said. “We were very good with the ball and dogged and determined off the ball.

“I thought we fully deserved to win.”