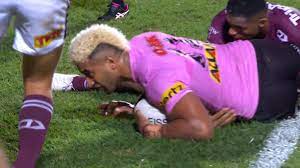 Luai set up three tries, Kikau and To’o each bagged doubles while makeshift left centre Matt Burton crossed for one as Manly’s right side defence was cut to ribbons in ruthless fashion.

The 40-point loss is Manly’s biggest ever at their home ground which was once a fortress but now holds few fears for visiting teams.

Halfback Nathan Cleary wasn’t heavily involved in the attacking plays but kicked brilliantly throughout with both high and short kicks causing the Manly backs endless headaches.

Manly showed little spirit for the fight in a sorry opening to the game and also have injury woes with Morgan Boyle (dislocated shoulder) and Moses Suli (knee to the back) failing to finish the game while a hobbling Dylan Walker was subbed off in the dying minutes.

Panthers coach Ivan Cleary described the performance as “very professional”, paying credit to Manly’s efforts to fix up a shocking early error rate to finish with an even share of the ball and an 80 per cent completion rate.

“Apart from their start I thought they actually played all right, they completed at 80 per cent for the game,” Cleary said.

“Possession was similar until the end. I was pretty happy actually.”

The early signs from Stephen Crichton at fullback and Burton at left centre were promising, with the pair likely to retain those roles against the Raiders next week.

“It was OK. It should get better,” Cleary said.

“When you get changes, even the mental challenges of this week, it tests your systems around players coming in and out. It does test your culture and it stood up tonight for sure.

“It’s early days but happy with what I’ve seen. You don’t win the comp in March.”

Cleary also admitted some confusion over a call in the second half to take play back a full set to penalise Mitch Kenny for a crusher tackle and put him on report.

“I’ve never seen that before. Obviously [the referee has] got a call from above,” Cleary said.

“I thought I’ve maybe seen before where they put someone on report on the run. They obviously saw something in it.”

A huge score was in the offing early as Manly produced close to the worst 20-minute period of any side so far this year, making five errors in their first 10 sets.

They meekly handed Penrith a 22-0 lead in 23 minutes that the 2020 runners-up didn’t have to raise a sweat to earn, compounding schoolboy errors with awful defensive reads.

A drop from a Cleary bomb in the third minute allowed To’o to cross out wide from the scrum and a nice interchange of passing in the middle from Isaah Yeo and James Fisher-Harris put Moses Leota over in the 11th.

Kikau showed incredible hands to scoop up a Luai grubber that Manly failed to defuse to score in the 17th before To’o bagged his second from a superb Matt Burton long ball in the 24th.

Manly’s interchange players were the first to show any fight for the home side with Sean Keppie standing in a tackle and producing a late offload to Cade Cust that caught Penrith off guard, with the utility scooting 20 metres to score next to the posts.

Josh Aloiai produced some huge charges and Keppie all but scored himself not long after but couldn’t quite get the ball down as Manly restricted the deficit to 16 at the break.

Kikau, fresh off passing a half-time HIA, crashed over for his second early in the second half and Burton made it five of six tries scored on the left edge when he cashed in on a period of sustained pressure in the 63rd minute.

Individual brilliance from Cleary to regather his own short grubber then re-kick the ball off balance set up Kurt Capewell in the 68th before Charlie Staines – moved to fullback for the final few minutes of the contest – showed some serious pace to put Paul Momirovski over to seal the huge win.

There was one final dash from the Panthers as Cleary almost scored in the final seconds but was taken out off the ball by Daly Cherry-Evans and instead added two points from in front.

The Panthers are now 4-0 for the season – the first time since 1997 they have won their opening four games.