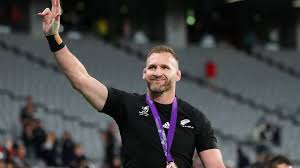 WELLINGTON, 01 JUNE 2020 (STUFF NZ) – Kieran Read is neither defined by his failures, nor tortured by them. The great All Blacks No 8 and hugely successful captain has enjoyed the chance to sit back and reflect in recent weeks and gladly reports there has been little in the way of sleep lost.

Nor should there be. The man won two World Cups in an 11-year All Blacks career studded with victories and silverware; he also lifted four Super Rugby crowns during 156 appearances for a Crusaders outfit that has universally set the standard in the professional game. A bum note or two at the tail end in no way scuppers the symphony of success.

Read’s storied rugby career is not quite over as he prepares for one lost shot at the Japan Top 14 in 2021, the ravages of Covid-19 permitting. But his international body of work has had its final chapter written and it’s one the 34-year-old Cantab has well and truly come to terms with.

Read on Monday was made an Officer of the New Zealand Order of Merit to become rugby’s latest addition to the nation’s honours system. He said he was humbled to be recognised by “something bigger than rugby”. And, as is the way at such moments, the most recent All Blacks captain (52 tests in total) has taken the time to reflect on what has gone before.

For Read, of course, the most recent experience is the most keenly felt. But, as he tells Stuff in an interview from his home in Christchurch, the All Blacks’ failed tilt at sporting immortality at the World Cup in Japan last year did not keep him up at nights during lockdown, nor will it as the planet opens back up again.

“Not at all,” says the personable loose forward with a chuckle. “It’s certainly something you have little reflections on, going over the what-ifs a little. But, hey, it can’t be changed. It is a tough game to be part of and it doesn’t always go your way.

“There can only be one little thing that is just off and it’s expanded on a world stage and a big occasion. [The World Cup] was still a great time and, looking back, some of my best times as an All Black, even though it wasn’t as successful as the others. It’s all part of your journey.”

Read, or course, had his pinnacles as an intrinsic part of the All Blacks teams that triumphed at the 2011 and ’15 global tournaments, achieving the first back-to-back victories in the history of the event.

“They were special,” he reflects. “Heading into 2011 at home, my first World Cup, and you’re going ‘we’ve just got to win this thing with all the history that’s behind us’. That was a different kind of tournament in terms of the pressure, and it probably set us up for the last decade with our mental ability.

“It was different in ’15 when you came in with a lot more confidence, in a team that was rightly considered the world’s best. They were good years and great to be part of.”

But Read doesn’t measure success strictly by the shiny objects locked away in his sideboard.

“The World Cups stand out … but I look at the experiences I’ve had, the trips to South Africa with the Crusaders or end-of-year tours where you got to travel around, go to the Vatican City, and things you just would never have done if you weren’t living this life.

“I’ll probably hold on to those [memories] a lot more than the medals and things like that.”

Of course the good times don’t last forever. In 2017’s Read’s All Blacks were not able to prevail in an epic, deadlocked series against the British and Irish Lions; exposing perhaps the cracks in the façade that were so brutally broken down by England in last year’s semifinal in Yokohama.

The lines are fine. The referee doesn’t inexplicably change his call late in the deciding Lions test at Eden Park, the All Blacks in all likelihood squeeze out a memorable series victory.

“It was great to be part of a series like that, so keenly fought out,” says Read. “It shows, man, this game over the last four or five years has got so competitive internationally … much more than perhaps the early part of my career.

“Looking back on the Lions, there are always things we could have done differently, but when it came down to it, a referee sometimes makes a call and that’s what you’ve got to deal with. I’m certainly no less proud of what we achieved in that series.”

Read’s response is revealing when you ask him how he’d like to be remembered in the annals of our rugby history.

“That’s probably for others to judge,” he prefaces his response with. “I always wanted to be someone who put the team first and a guy who always put his body on the line and consistently did that every time he ran out. That’s how I’d like be remembered.”

Read was very good for a very long time. His 127 test caps are the third most in All Blacks history. He won 107 of those encounters. He was part of a Crusaders team for 13 years that was unerring in its relentless competitiveness. You can count his bad games on a single hand.

The secret of that success?

“Early on I probably found a drive, a hunger and a love for the game. I wasn’t necessarily a star back at school, but getting down to Canterbury helped, getting into a system there where you were walking round looking up at all these All Blacks.

“That was inspiring. I’ve always been pretty driven to get the best out of myself. It was a great era to be part of and I’m very proud of being across some pretty good years for the All Blacks and Crusaders.”

Read lauds his team-mates and coaches who have all contributed so heavily to his success; and pays healthy tribute to wife Bridget who has been the rock at home with their three children while he has continued to chase his greatness. “The kids are certainly looking forward to seeing dad around home a bit more, and I’m excited by that too.”

Also honoured in the Queens Birthday round was long-term Olympics administrator, and former New Zealand hockey representative, Barry Maister who was awarded the Companion of the NZ Order of Merit, as was Waikato racing identity David Ellis.