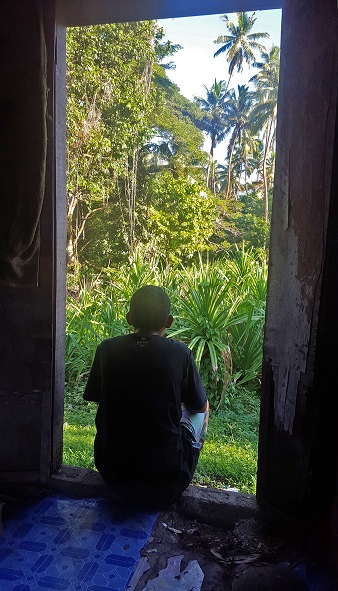 The 16-year-old boy who was allegedly assaulted by military officers, ponders his future. Picture: ELIKI NUKUTABU

THE 16-year-old boy interrogated by military and police officers over an anti-government social media post has spoken out about the incident.

In an interview with this newspaper under condition of anonymity, the teenager claimed he was physically abused at the Republic of Fiji Military Forces Queen Elizabeth Barracks in Nabua, Suva on September 23.

He claimed two men in civilian clothes who identified themselves as military officers approached him at his home around 9am.

“E rua na tagane rau sobu mai na motoka, rau lako yani i vale, oti ya rau kerei au sara me keitou vodo (Two men got off the car, they came home and requested that I go with them),” he said.

He said on arrival at the army barracks, he was taken to an empty room where four men were waiting. He said he was questioned about a social media post where swear words were allegedly directed at Prime Minister Voreqe Bainimarama.

He said a while later a man who appeared to be of superior rank entered the room and directed the men to hand him over to police because it was their jurisdiction.

He claimed he was taken to another room and forced to sit on the floor.

“Ratou tukuna meu dabe i ra, ratou sa qai dabe cawiri taki au, ratou butulaki au, ratou vaculaki au qai vosavosacataki au (They told me to sit on the floor, they also sat down encircling me, they assaulted me and started swearing at me),” the boy said.

“Au tukuna tu ga vei ratou niu sega ni biuta cake nai taba, ratou vaculaki au tu ga, au sa rere ga, au qai tukuna niu cakava (Despite telling them many times that I didn’t post up the photo, they kept assaulting me so I got scared and said I did it).”

The teenager said he feared for his life and the men forced him to admit that he was the person behind the social media post.

He claimed they then handed him over to the Criminal Investigation Department at Toorak, Suva.

He said the same men forced him to admit to the police that he had put up the social media post.

The teenager claimed that on the morning of September 24, he was taken to Totogo Police Station and visited by a female official from the juvenile centre and was later released.

His mother, who also spoke to this newspaper under the condition of anonymity, claimed her son was in a lot of pain and his neck was swollen on the day he was released by police.

She further claimed he experienced back aches and at times couldn’t move because of the pain.