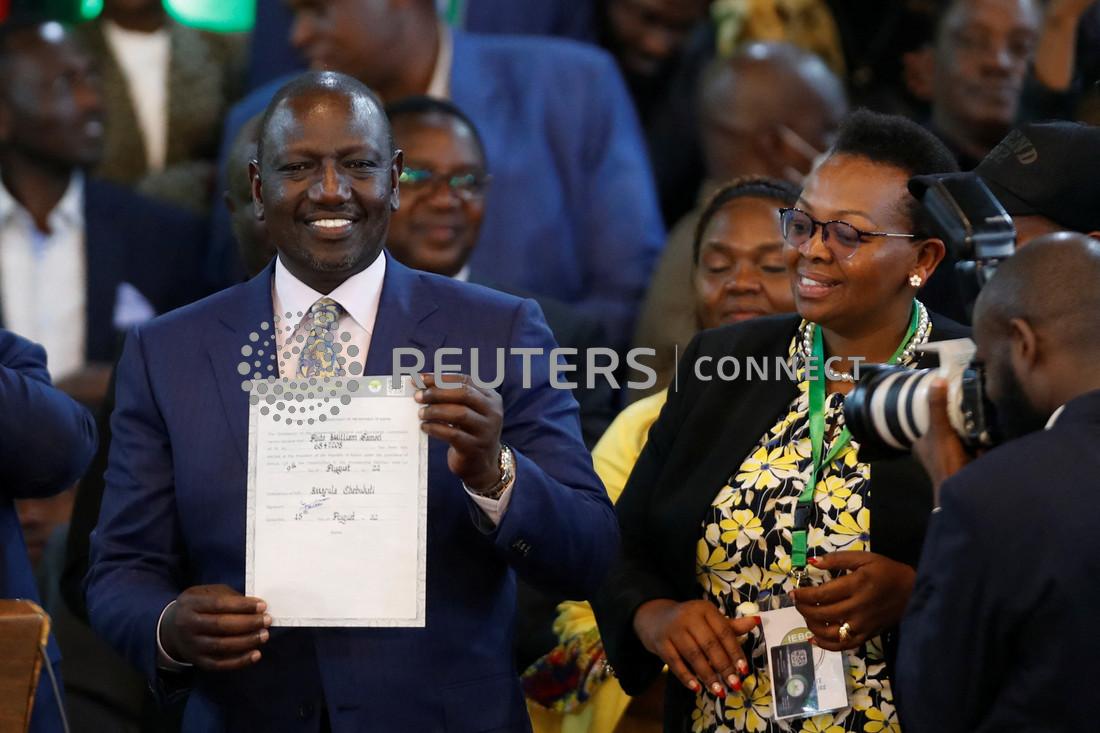 Kenya's Deputy President William Ruto and presidential candidate for the United Democratic Alliance (UDA) and Kenya Kwanza political coalition reacts after being declared the winner of Kenya's presidential election at the IEBC National Tallying Centre at the Bomas of Kenya, in Nairobi, Kenya August 15, 2022. REUTERS/Thomas Mukoya

Hailing the electoral commission as “heroes” after he was declared the winner, Ruto said: “There is no looking back. We are looking to the future. We need all hands on deck to move forward.”

The 55-year-old had made Kenya’s class divisions the centrepiece of his campaign to become Kenya’s fifth president, promising to reward low-income “hustlers.”

He was also scornful of Kenya’s political dynasties – his opponent Raila Odinga and President Uhuru Kenyatta, son of the nation’s first vice president and president, respectively. Kenyatta, who has served his two-term limit as president, fell out with Ruto after the last election and this time endorsed Odinga, making his fifth attempt at winning the presidency.

Once in office, Ruto will have to confront an economic and social crisis in East Africa’s most advanced economy, where poor Kenyans already reeling from the impact of COVID-19 have been hit by global rises in food and fuel prices.

The worst drought for 40 years has devastated the country’s north, leaving 4.1 million people dependent on food aid, while its debt levels have soared.

Ruto, who heads the Kenya Kwanza (Kenya First) Alliance, had appeared to be leading opposition leader Odinga as Kenyans awaited final results of the election held nearly a week ago.

Minutes before the chairman of the electoral commission Wafula Chebukati announced that Ruto had won, his deputy Juliana Cherera had told media at a separate location that she and three other commissioners disowned the results.

“We are not able to take ownership of the results that will be announced, because of the opaque nature of this last phase of the general election,” she said.

The electoral commission has seven commissioners.

Amid fears that vote-rigging allegations could lead to bloody scenes like those that followed presidential polls in 2007 and 2017, Cherera urged the parties to pursue any disputes through the courts.

Diplomats and international observers were whisked out of the tallying hall before Chebukati spoke, as scuffles broke out.

Before announcing Ruto as the winner, Chebukati said two commissioners and the electoral commission’s chief executive had been injured and were being treated.

The winning candidate must get 50% of votes plus one.

Kenya’s dollar-denominated government bonds fell by as much as 2.9 cents on the dollar, Tradeweb data showed.

The United Nations took note of the results, U.N. spokesperson Stephane Dujarric said, and encouraged all candidates to “resort to legal channels to address any challenges that may arise.”

The U.S. embassy in Kenya urged all parties to work together to peacefully resolve concerns about the election.

“We ask all political party leaders to continue to urge their supporters to remain peaceful and refrain from violence,” it said in a statement.

Odinga did not attend the announcement. His running mate, Martha Karua later tweeted: “it is not over until it is over.”

Saitabao Kanchory, national chief agent for Odinga’s Azimio La Umoja (Declaration of Unity) Alliance told reporters outside the tallying centre that it would continue to “hold Wafula Chebukati … to account to the people of Kenya to deliver a free fair credible election.”

In the Kibera slums in Nairobi and Kisumu, both Odinga strongholds, the reaction was immediate.

Several plumes of black smoke rose in the streets of Kibera, mirroring similar scenes in Kisumu, to the west of the country, as people burned piles of tires. Police fired tear gas to disperse the crowds.

In Kisumu, Governor Anyang’ Nyong’o called for calm as protests in parts of the lakeside town turned violent after Ruto’s victory was declared. He said the Azimio leadership was working to plan its response to “ensure justice” for Odinga.

Amid shouts of “We need Raila now!”, “Chebukati must go!” and “No Raila, no peace!”, motorcycle drivers honked their horns and people blew into vuvuzelas and whistles.

By contrast, the mood in Eldoret – Ruto’s home turf – was ecstatic.

“He is about the bottom up. People from down there will be up here,” said Kibitok, who had spent all day on a stretch of Eldoret sidewalk popular with Kenyans who like discussing politics.