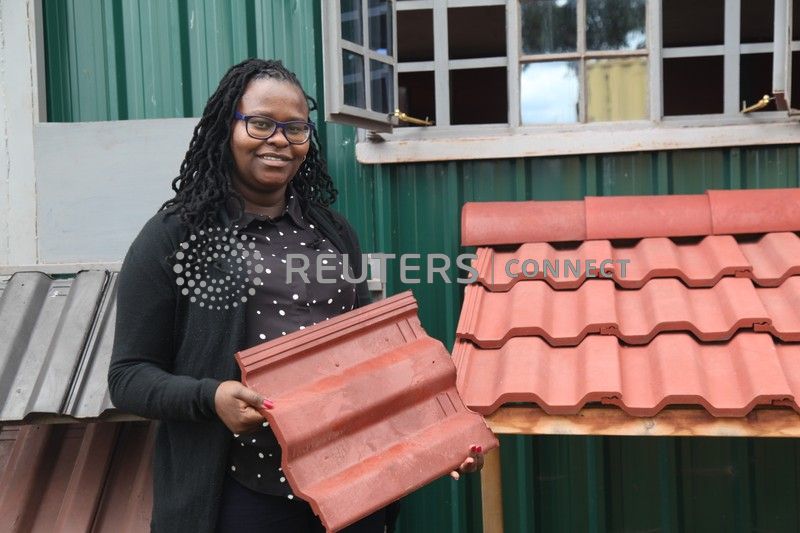 Hope Mwanake, co-founder of Eco Blocks and Tiles poses for a photo at her factory in Gilgil, Kenya on Dec 4, 2019. Thomson Reuters Foundation/Nita Bhalla

An environmental scientist who ran a waste collection service in Kenya’s central town of Gilgil, she witnessed first hand the mountains of plastic buckets, bottles and jerry cans discarded by residents, hotels, shops and schools.

“We were just dumping all the plastic in the landfill. It didn’t make sense. We knew there had to be a better way,” said Mwanake, 30, at her factory on the outskirts of Gilgil, 120 km (75 miles) north of the capital Nairobi.

“We wanted to do something with all this plastic waste and after a lot of brainstorming, research and experimenting, we came up with a value-added product with a market demand that would also help to reduce all this plastic in the environment.”

Along with business partner and fellow environmental scientist Kevin Mureithi, she founded “Eco Blocks and Tiles” in 2016. It is the first company in Kenya to manufacture roof tiles and other construction materials from plastic and glass waste.

The tiles are more durable, lighter and easier to transport and install than concrete or clay tiles. They are also safer for rainwater collection, but are available at a similar cost.

Through word of mouth, promotions in hardware stores and social media posts, the start-up has attracted dozens of home owners and small businesses this past year.

The company has also gained support from the Kenyan government, which is promoting the use of sustainable greener materials as part of efforts to reduce carbon emissions generated from the east African nation’s construction industry.

Pollution is also a concern so repurposing plastic to build is a “win-win”, the NCA added in a statement.

A million plastic drinks bottles are bought every minute globally, while some 500 billion disposable plastic bags are used every year, says the United Nations.

Nearly a third of plastic packaging escapes waste collection systems, and at least 8 million tonnes of plastic leak into the oceans each year, smothering reefs and threatening marine life.

Plastic also enters water supplies and the food chain, where it could harm people in the long term, the U.N. says.

A global fightback is gearing up – Kenya has banned plastic bags, other countries target straws or styrofoam – yet environmentalists say much more is needed.

With Kenya producing more than 3 million tonnes of waste – of which only 8% is recycled, scientists-turned-entrepreneurs Mwanake and Mureithi felt something had to be done.

“We examined the properties of plastic and glass and then we literally cooked empty shampoo and vegetable bottles in a big drum and mixed the molten polymer with sand crushed from glass waste,” said Mwanake.

“It looked like a strange porridge but once placed in moulds and cooled, we found we had a very strong and durable product.”

Since the pair set up the company, they have tapped crowd funding and attracted grants from organisations such as packaging firm Mondi and Netherlands-based ViaWater.

Commercial production of the ecotiles began in 2018.

Each tile is priced at 850 Kenyan shillings ($8.50) – equivalent to the price of concrete or clay tiles.

So far, they have turned more than 56 tonnes of plastic waste into 75,000 tiles for 30 homes and businesses.

Coffee shop owner Julia Tatton didn’t hesitate when she saw the plastic roof tiles on display outside her neighbour’s store.

“These tiles are going to last forever and are going to outlive me for sure,” she said. “They actually work out cheaper as they are lighter than clay tiles, so you actually save money on the wooden support required to hold them in place.”

Customers save up to 40 percent on wood when using ecotiles, said Mureithi, to the benefit of their pocket and the forests.

Cement, a key ingredient of concrete, releases 5% to 8% of global greenhouse gas during its manufacturing, according to the Global Cement and Concrete Association, a non-profit.

As governments and companies look to cut planet-warming emissions, in line with Paris Agreement goals to limit global temperature rise to “well under” 2 degrees Celsius (3.6F), finding ways to ‘green’ construction is key.

Mwanake said it was vital to boost visibility and awareness to grow her business, as many Kenyan consumers had a negative view about eco-friendly, recycled products.

“Unlike in Western countries where labelling a product as ‘eco-friendly’ is considered a positive by consumers and it is quickly snapped up, in Kenya it can be seen as a negative … as if the product is of lower quality,” said Mwanake.

“That view is slowly changing, but it is taking time,” she said. “We know there is a market. We just have to reach it.”