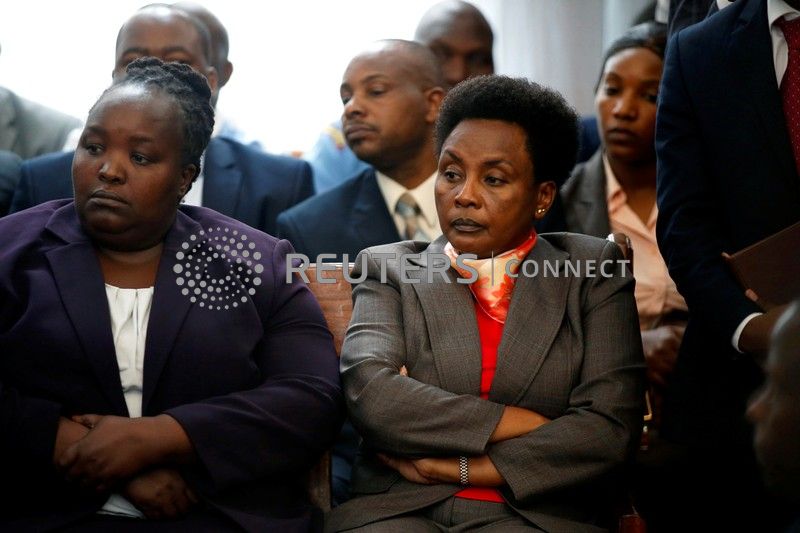 NAIROBI (Reuters) – A Kenyan court said on Friday that the deputy chief justice at the country’s highest court cannot be prosecuted for abuse of office in a case brought against her last year, saying police failed to follow correct procedure in gathering evidence.

The Director of Public Prosecutions, Noordin Haji, has said his office will appeal the decision, saying all their evidence was collected using properly issued court warrants.

Deputy Chief Justice Philomena Mwilu was arrested last August on suspicion of corruption, failure to pay tax and improper dealings with a local bank that was later placed in receivership.

Mwilu was arrested, charged in August in a Nairobi magistrate’s court and released on bail. She denied any wrongdoing.

The same month, the high court temporarily halted criminal proceedings against her and accepted an application she filed that argued the case raised constitutional issues.

The five-judge bench said on Friday the police’s Directorate of Criminal Investigations (DCI) violated her privacy and did not follow procedure in gathering evidence against Mwilu, including by misusing a search warrant.

“Having found that the DCI thereby misrepresented facts and misused the court order, we have come to the conclusion that the prosecution against the petitioner cannot proceed,” Judge Hellen Omondi said in a ruling.

“An order is hereby issued to quash the criminal proceedings in Nairobi chief magistrate’s court.”

Haji said in addition to appealing the ruling, his office would also file a complaint with Mwilu’s employer – the Judiciary Service Commission for further action.

“If the court had called on all the parties, we could have evidence before them that we had all the warrants issued in relation with the investigations of the suspect’s accounts,” Haji told reporters.

“At no time would the DCI or any other state agency act contrary to the dictates of the law, and more so, with regard to intrusive investigations that require sanction of the court.”

In early 2018, the government launched a new anti-graft push led by Haji, a former deputy head of national intelligence, who has brought criminal charges against dozens of civil servants and business people.

Corruption in East Africa’s biggest economy drains billions of dollars from the state each year.