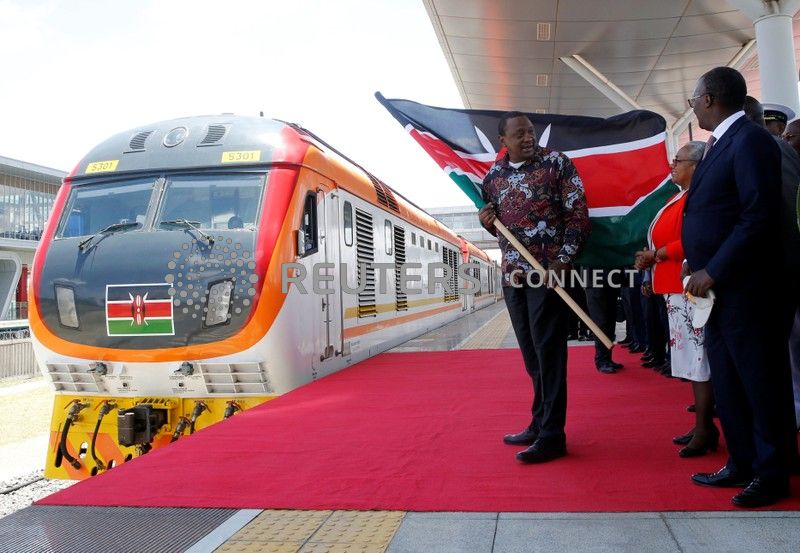 Kenya's President Uhuru Kenyatta flags off the train linking Nairobi and Naivasha at the Nairobi Terminus operating the Standard Gauge Railway (SGR) line constructed by the China Road and Bridge Corporation (CRBC) and financed by Chinese government in the outskirts of Nairobi, Kenya October 16, 2019. REUTERS/Thomas Mukoya

The extension links to another Chinese funded and built $3.2 billion line between the port of Mombasa and Nairobi that opened in 2017 but is so far underutilised for cargo services.

Upgrading Kenyan railways has been part of Beijing’s “One Belt, One Road” initiative, multi-billion dollar infrastructure projects aimed at improving land and maritime trade routes between China and Europe, Asia and Africa.

Kenya had planned to open an industrial park in Naivasha, offering companies tax breaks for investing in manufacturing, and preferential tariffs for electricity generated in the nearby geothermal fields. But that has been delayed.

The railway was a pet project of President Uhuru Kenyatta who opened the extension on Wednesday.

Kenyatta was re-elected for a five-year term in 2017 after promising to develop the East African nation’s infrastructure, but it has been dogged by problems.

In April, China refused to fund the planned $3.7 billion extension from Naivasha to the Ugandan border town of Malaba.

Transport Minister James Macharia said then that the government would spend $210 million to rehabilitate the colonial-era Malaba line instead.

Kenyatta rejected criticism of his plans, likening suggestions that the new railway was to “nowhere” to criticism of the original Uganda-Kenya railway by politicians during the British colonial era, who called it the “lunatic express”.

“Those who think they will take us backwards, they should leave Kenya and look for another country,” Kenyatta said as he opened the new railway.

Wu Peng, the Chinese ambassador to Kenya, said the railway from Mombasa had already had a positive impact on the economy, citing tourism, investments and communications.

“More jobs will be created,” Wu said at the same ceremony.

Many importers say the new Mombasa to Nairobi railway is too expensive to move freight and have been angered by government attempts to force them to use it.

It costs about $800 to truck a container from Mombasa to Nairobi, but $1,100 by rail, mainly due to extra costs for moving goods from the rail terminus to an inland depot.

“Even as they build the railway, they should also repair this road,” Dominic Njogu, a 35-year-old “bodaboda”, slang for motorbike, driver, said of the road serving tourist resorts, flower farms and Naivasha itself.

“It is full of big potholes and we have even lost some lives as cars and motorbikes swerve to avoid the holes.”

Government borrowing has been ramped up to fund the railway and other projects such as roads. Total public debt stands at about 55% of GDP, up from 42% when Kenyatta took power in 2013.

Lee Kinyanjui, the governor of Nakuru county which includes Naivasha, said the arrival of the railway will spur investments.

“We have eight major companies who want to come set up here in Naivasha,” Kinyanjui told the ceremony at the Mai Mahiu station near Naivasha, without specifying which ones.

He also said the line will help boost transport infrastructure in the region and lower costs for farmers.