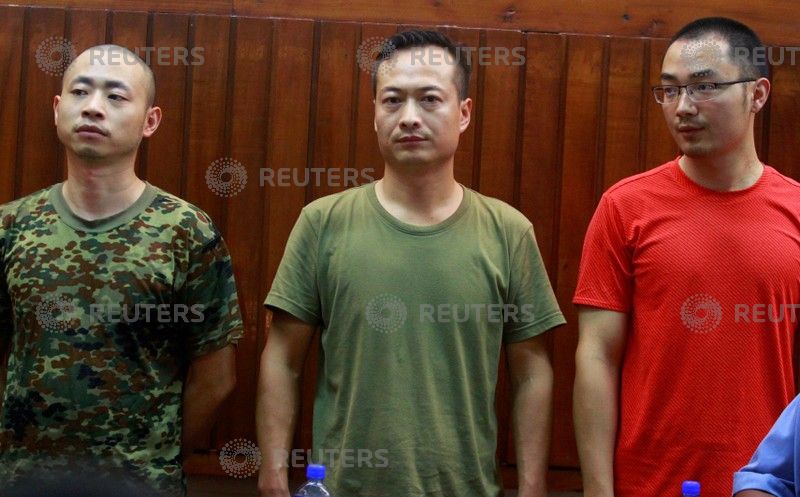 Chinese employees with China Roads and Bridges Corporation, stand inside the dock at the Mombasa Law Courts in Mombasa, Kenya November 26, 2018. REUTERS/Joseph Okanga

The charges are the latest in a series of high profile corruption prosecutions and come at a time of growing complaints about immigrants from China, a country that has played a key role in improving Kenya’s infrastructure in recent years.

The men are senior employees with China Roads and Bridges Corporation, the company that constructed and runs the railway opened last year between the capital and the port of Mombasa.

China funded the project, which is the biggest of its kind since independence.

The three were arrested on Saturday in Mombasa for attempting to bribe investigators with amounts totalling 900,000 Kenyan shillings ($8,800).

The men “jointly offered a financial advantage of Kshs. 500,000 as an inducement to influence an ongoing criminal investigation in their favour,” the charge sheet said.

The men denied all charges, which included two other counts involving 200,000 shillings each.

Presiding magistrate Julius Nang’ea said the court will rule on their bond application this week and remanded them to a maximum security prison in Mombasa.

Many African countries have turned to China in recent years for funds, technology and equipment to develop infrastructure.

A Kenyan lawmaker from the ruling Jubilee Party this month proposed limiting foreign involvement in public contracts after what he said was an outcry over Chinese businesses driving out local companies.

Critics of China’s infrastructure finance say it imposes an unsustainable debt burden on the country.

Kenyan employees of the railways have complained of mistreatment from Chinese staff, which the railway denies.

The railway replaced a century-old line and reduced the journey time to just over four hours from 12 but customers have complained that tickets can only be bought three days in advance and only for one-way travel.