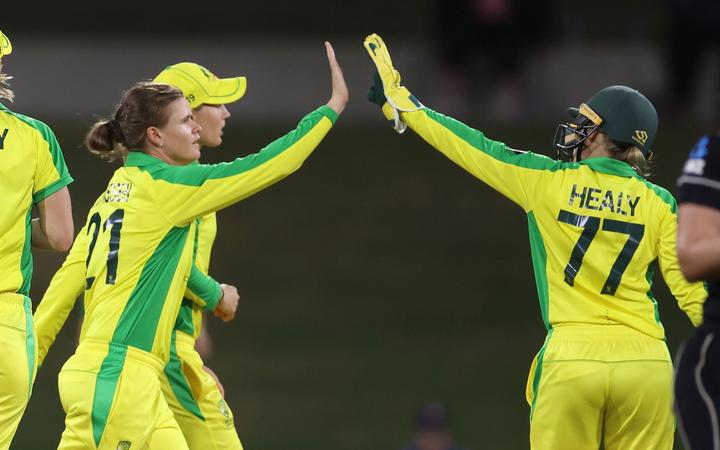 Australia keep the Rose Bowl for a 22nd year after beating the White Ferns. Photo: PHOTOSPORT

The Australian cricketing juggernaut continued as the visitors retained the Rose Bowl with a 71-run win over the White Ferns in the second ODI at Bay Oval in Mt Maunganui.

Australia have now won the Rose Bowl for 22 years and made the final game of this series in Mt Maunganui on Saturday a dead-rubber.

Sent in to bat, Australia posted 271-7 on the back of vice-captain Rachael Haynes’ 87.

White Ferns spinner Leigh Kasperek made a record return to the ODI side, coming in for fast bowler Lea Tahuhu, after missing selection in the previous series against England and the opening game against Australia.

Kasperek was the pick of the New Zealand bowlers taking 6-46 off her 10 overs, making her just the fourth White Fern to take six wickets.

It’s also the best figures for any bowler against the Australian women’s team.

The Australian openers navigated some early pressure from Jess Kerr but pushed on to set a solid platform.

In her 200th game opener Alyssa Healy fell just short of a half century when she was dismissed for 44 runs, caught on the boundary off the bowling of Kasperek in the 18th over.

Captain Meg Lanning was removed by opposition skipper Satterthwaite for 49 but Haynes pushed on to pass 50 runs for the 15th time in ODIs.

A late flurry of wickets by the White Ferns saw the visitors lose five wickets in 12 overs and kept Australia three runs shy of their highest ever total at Bay Oval.

The Australian opening bowlers struck twice in the opening two overs, removing Lauren Down for no score five balls into the innings and two balls later captain Amy Satterthwaite departed for 6, leaving the home side reeling at 7-2 halfway through the second over.

Amelia Kerr and Hayley Jensen combined to put on 69 runs for the third wicket and kept the White Ferns on target with the run rate before Jensen was dismissed for 28.

Kerr and Brooke Halliday continued to keep the side in touch with the Australian total, but after Kerr was out for 47 no other batter could make a major contribution as wickets tumbled.

The White Ferns lost four lower middle order wickets for 10 runs and their last wicket 16 runs later as they were all out in the 45th over.

Jess Jonassen took 3-29 from 9 overs to be the most successful of Australia’s seven bowlers.