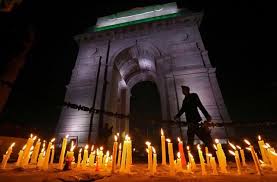 A soldier walks during a candle light vigil to pay tribute to Central Reserve Police Force (CRPF) personnel who were killed after a suicide bomber rammed a car into the bus carrying them in south Kashmir on Thursday, in front of India Gate war memorial in New Delhi, India, February 16, 2019. REUTERS/Anushree Fadnavis

SRINAGAR (Reuters) – India has warned against rising communal tensions across the country as some Kashmiris living outside their state said they faced property evictions while others were attacked on social media after a suicide bomber killed 44 policemen in the region. The car bomb attack on a security convoy on Thursday, claimed by Pakistan-based […]