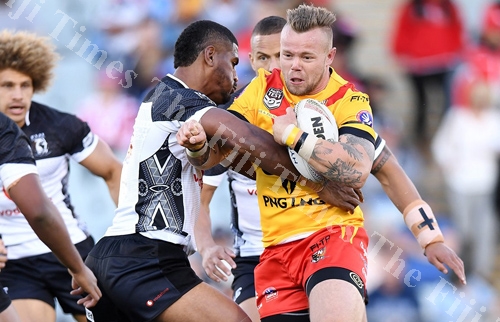 Luke Page of the PNG Kumuls takes a hit from Tui Kamikamica of the Fiji Bati during their test match. Picture: NRL

MELBOURNE Storm has locked in contract extensions with four members of its forward pack, including Fiji Bati front-rower Tui Kamikamica.

Kamikamica and New Zealand Kiwis and Dally M Second-Rower of the Year finalist Kenny Bromwich, who are coming off career-best seasons in 2019, have signed on with Storm through to the end of the 2022 season.

Queensland State of Origin star Christian Welch has taken up his option to remain with Melbourne for 2020, while Tongan representative Albert Vete, who was off contract, has been given a one-year extension.

Bromwich, who made his NRL debut for Melbourne in 2013, started in the second-row in all 27 matches for his club in 2019 to take his career total to 150 games.

He was a constant threat on Storm’s left edge, scoring five tries to go with eight linebreaks and 11 linebreak assists, and also joined the club’s senior leadership group for the first time.

After playing seven Storm games in 2016-17, Kamikamica had a breakthrough 2019 by making 21 NRL appearances, averging 69.5 metres per game in attack and 19.6 tackles in defence, as well as featuring for Fiji in their end-of-season internationals.

Meanwhile, Welch, who made his Origin debut for the Maroons last season, will get the chance to add to his 77 Storm games when he returns from an ACL injury in 2020.

The 27-year-old was outstanding in the first half of the 2019 season to force his way into the Queensland line-up for Game Three against New South Wales.

Vete needs just two more matches to reach 50 for his NRL career which began with the NZ Warriors in 2015 before a switch to Storm in 2018.