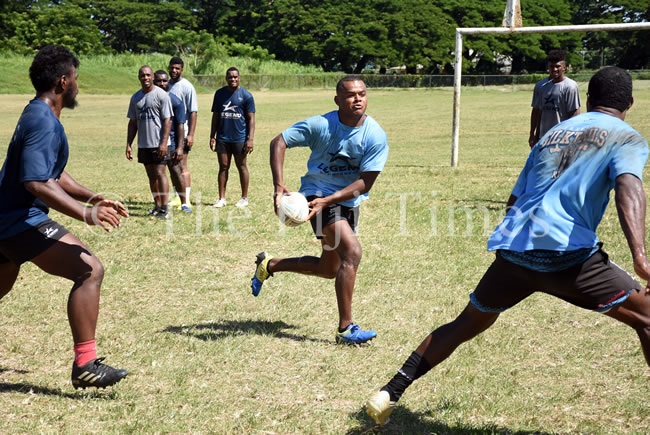 Kaiviti Silktails started the game strong with Fullback Ropate Tobe crossing the line with a double 10 minutes into the game.

The first saw Tobe weave through the disjointed Magpies defensive line for a brilliant individual try. The second came off the back of a right edge support play as halfback Penioni Tagituimua broke through the line, passing to his Winger Vuate Karawalevu who skirted the sideline as he offloaded to Tobe to score.

Whilst the Magpies were unable to maintain any attacking consistency, their first try was scored through a rolling grubber when Samuel Stratis swept the ball backwards to his edge partner Dane Francis who crossed the line for their first try.

Finding their rhythm with the ball, Western Suburbs found themselves with multiple back-to-back sets after two forced drop-outs and unnecessary Silktails penalties. However the visitors relieved the pressure through impressive line speed which resulted in Centre Ratu inoke Vasuturaga picking up a loose ball and storming up the field.

Kaiviti Winger Vuate Karawalevu was rewarded for his consistent pressure on both ends of the field, scoring a try by cleaning up after the Magpies backs failed to take possession of a high ball.

The Magpies managed to squeeze in one more try minutes out from halftime when Halfback Kurtis Preece feigned a pass down the right edge, crossing to keep his team within a converted try.

The home team came out of the dressing rooms firing, scoring the first try of the second half when Five-Eighth Brock Pelligra chose to send the ball to Second-Rower Samuel Kamu, who found a gap next to the goal posts. A successful Samuel Stratis conversion evened the score for the first time in the game.

The home team finally broke the score deadlock as they sent the ball to their right edge for Keiran Wyld to exploit an overlap, leading the score for the first and only time in the game.

With their backs against the wall, the Silktails reverted back to the successful style of football that they played at the start of the game with a strong running game and clever darts out from behind the play-the ball.

Their first try of the half came as Waisale Nayavucere scored from dummy half. Converting his own try, the Silktails where once again ahead with less than 20 minutes left in the game.

The Magpies looked as though they didn’t have any answers for the Silktails regenerated attack, letting through three more unanswered tries with Kaiviti Fullback Ropate Tobe scoring the third of his hattrick as he ran onto the ball 5 metres from the try line.

This was followed by Nayavucere’s second try of the game as the ball was sent through the hands of Ratu inoke Vasuturaga and Tobe after a well placed Silktails bomb.

Ratu Inoke Vasuturaga was able to score one of his own as he ran through the desperate Magpies defence, leaving the Silktails in front with less than eight minutes remaining.

The Magpies managed to cross once more through Kurt Preece, who crawled over from just metres out from the line making the final score 38-26 and giving the Silktails their second win in a row.