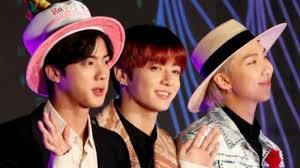 The autographed microphones were the first ever items to be sold at auction from BTS, Julien’s said. The auction house had previously estimated that the set would sell for between $10,000 and $20,000.

BTS, a seven-member boy band with a message of self-confidence, has spearheaded a wave of Korean pop music beyond Asia and into the United States just six years after its 2013 debut. In 2019, BTS became the first group since the Beatles to score three No. 1 albums in a year on the Billboard 200 charts.

The microphones sold at auction were used from 2017 to 2019 on the band’s “Love Yourself” tour.

The auction was held to benefit the Recording Academy’s charitable arm, MusiCares. Also sold were items from Aerosmith, Pete Townsend, Stevie Nicks, the late Tom Petty and others.

BTS is among the acts scheduled to perform at Sunday’s Grammy Awards.