Justin Marshall on why the All Blacks are off the pace 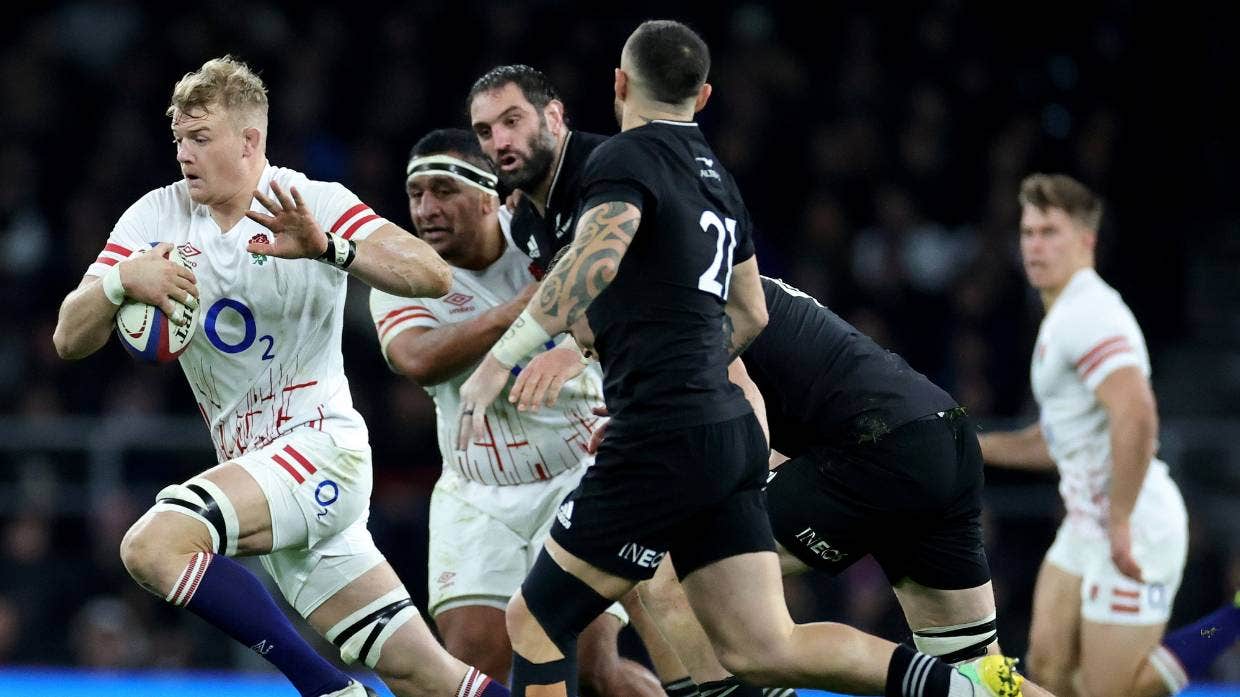 David Ribbans helped provide some late power for England's revival to secure a draw against the All Blacks. Picture: STUFF SPORTS.

All Blacks great Justin Marshall has offered a plausible theory as to why Ian Foster’s team have fallen off the pace a year out from the World Cup.

The All Blacks ended an inconsistent year with a draw against England in London last weekend to go with eight wins and four losses. The defeats included a historic series loss against Ireland and losing to Argentina in New Zealand for the first time.

Marshall felt they had failed to make the necessary adjustments to changes in the rules around the breakdowns that had negated one of their key strengths – their counter-attacking game. He also felt the All Blacks hadn’t matched the moves by other top-ranked teams to introduce bigger players, particularly in the back row department.

Former halfback Marshall, a veteran pundit with Sky Sports who has a good measure on the modern game, appeared on the Evening Standard Rugby Podcast with former England loose forward Lawrence Dallaglio, and they were in agreement about the All Blacks’ ongoing struggles.

Dallaglio felt the year’s results across the leading nations from north and south had shown that “the game has changed in terms of the laws, and it has brought the hemispheres closer than it ever had before”.

“I totally agree,” Marshall replied. “And we are not seeing any more huge amounts of counterattack rugby. That is where the All Blacks were always so lethal – when the teams aimlessly gave them the ball back.

“You had a guy like Richie McCaw out there when you had a little more freedom at the breakdown, more freedom than you have got now particularly defensively to turn that ball over and catch the opposition out. That is where the All Blacks really kicked into action and caught teams on the hop because of their counter-attack.

“You don’t see them doing that as much now. They are a team much more orientated in playing territory.”

Marshall accused the All Blacks of failing to adapt as they finished the year ranked No 3 behind Ireland and France.

“I certainly feel and agree that the top two teams in the world at the moment are France and Ireland, and it’s pretty hard to separate both of them. They have got quality across the park.

“Where we [New Zealand] have not adapted is we have not realised the game is now all about big, strong ball carriers, men that are hard to move away from the breakdown, and we haven’t adjusted to that.

“Big ball runners like that command two tacklers usually which leaves you defensively short, and we haven’t got that type of ball carrier at the moment.

“So, in a nutshell, I agree with you, the laws have slightly changed which is allowing teams to be a little less mobile but bigger and tougher, and then secondly it is because I think the All Blacks have fallen away.”

Marshall’s comment on the All Blacks “falling away” was telling. Like many All Blacks followers, he is frustrated and somewhat bemused by the consistencies in the 2022 team.

“The problem is they are still on a roller coaster, their fluctuations are still very un-All Black like,” he told the Evening Standard Rugby Podcast.

“You usually get a standard of where the All Blacks sit. It may drop away a little bit or sometimes they might have an outstanding performance, but at the moment they are doing big chunks in performance and having drifts in games like they did over 10 minutes at the weekend. It is just very unusual for an All Blacks side to do that.

“Here is an easy way to describe it: against South Africa at Ellis Park in the second test after being resoundingly beaten in the first, they were completely outstanding. They moved the ball over the 100 metres of the field, they used the full width, and they ran South Africa off their feet. South Africa were replacing forwards just before half-time.