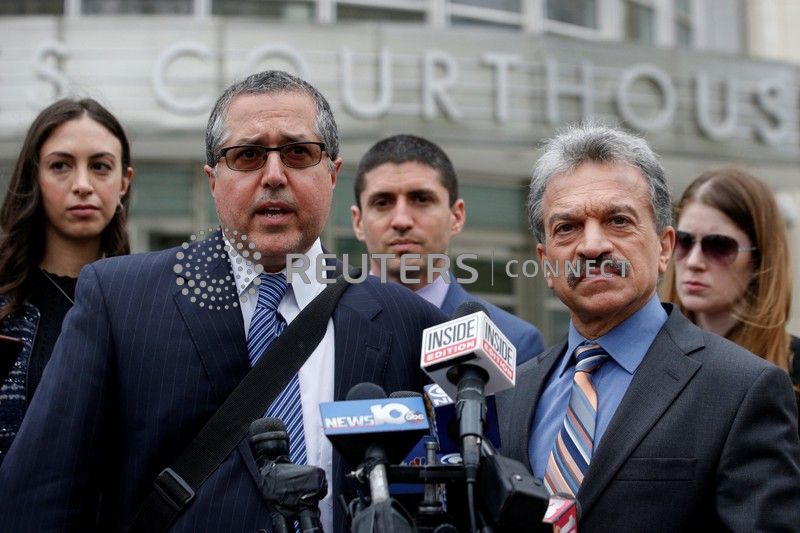 NEW YORK (Reuters) – Jurors in the trial of Keith Raniere, founder of the cultlike Nxivm organization who faces sex trafficking charges, are expected to hear testimony on Thursday from a former prominent member turned self-described whistleblower.

Mark Vicente, a filmmaker who joined Nxivm in 2005, has spoken out against Raniere on his website and in interviews after breaking away from Nxivm in 2017.

His appearance comes after the trial’s first witness, one of Raniere’s alleged victims, tearfully testified that the Nxivm leader forced her into an unwanted sexual encounter after declaring himself her “grand master.”

Raniere, 58, has pleaded not guilty to charges of sex trafficking, child pornography and other crimes. He faces life in prison if convicted.

Prosecutors say women were blackmailed into having sex with Raniere and branded with his initials as part of a secret society within Nxivm called DOS, an acronym for a Latin phrase that roughly means “master of the obedient female companions.”

Defense lawyer Marc Agnifilo has argued to jurors that members joined voluntarily and were never forced to do anything against their will.

Vicente, who took the witness stand toward the end of the day on Wednesday, said Nxivm president Nancy Salzman contacted him around 2005 after seeing a film he made about quantum physics and philosophy, saying she wanted to introduce him to Raniere.

That led Vicente to begin his association with the group. Vicente gave jurors a brief crash course on Nxivm, listing more than a dozen organizations and self-improvement programs under its umbrella that cost thousands of dollars.

Earlier on Wednesday, a former Nxivm and DOS member, Sylvie, who was identified only by her first name, told jurors she was recruited as a “slave” to another woman in the organization. Her “master” eventually ordered her to engage in sexual activity with Raniere, who also took nude photos of her.

She said she felt she had to do what she was told, both because of years of psychological manipulation by Raniere and others, and because she had given her master compromising blackmail material as “collateral.”

Nxivm, which started under another name in 1998 and is pronounced “Nexium,” was based in Albany, New York.