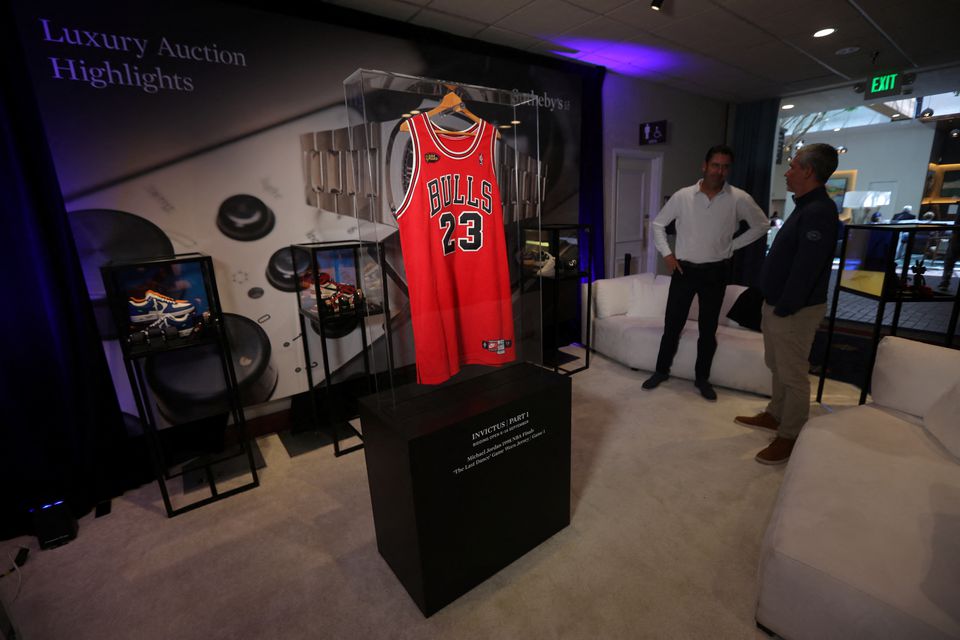 American basketball legend Michael Jordan's jersey from game one of the 1998 NBA Finals, which will go up for auction in September, is seen in a case in Monterey, California, U.S. August 18, 2022. REUTERS/Nathan Frandino

Sept 15 (Reuters) – Michael Jordan’s jersey from the opening game of the 1998 NBA Finals sold for over $10 million at an auction on Thursday, making it the most expensive piece of game-worn sports memorabilia in history.

“In the weeks since we announced the auction, there’s been palpable excitement from not only sports fans, but collectors alike who are eager to own a rarefied piece of history,” said Brahm Wachter, Sotheby’s Head of Streetwear and Modern Collectables.

“Yet again, today’s record-breaking result… solidifies Michael Jordan as the undisputed G.O.A.T, proving his name and incomparable legacy is just as relevant as it was nearly 25 years ago.”
Advertisement · Scroll to continue

Jordan’s jersey was expected to fetch $3 to $5 million at Sotheby’s “INVICTUS” auction and eclipsed the $3.7 million spent in May on Kobe Bryant’s Los Angeles Lakers jersey worn in his rookie year — the previous record for a basketball jersey at auction.

It also broke the record for any item of Jordan sports memorabilia after his autographed relic card from 1997-1998 sold for $2.7 million.

The jersey from the famed “Last Dance” season — named after the 2020 ESPN/Netflix documentary chronicling Jordan and Chicago Bulls in their quest to win their sixth NBA championship in eight years — attracted a total of 20 bids.