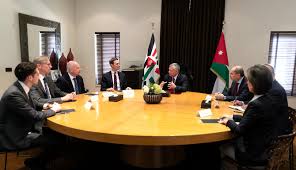 AMMAN (Reuters) – Jordan’s King Abdullah told U.S. President Donald Trump’s adviser Jared Kushner on Wednesday that a lasting Middle East peace can come only with the creation of a Palestinian state on land captured by Israel in a 1967 war and with East Jerusalem as its capital.

Kushner is leading a U.S. delegation to the Middle East this week. U.S. officials have said the trip, which began in Rabat and will include Jerusalem, is partly aimed at bolstering support for a late June conference in Bahrain, in which Kushner is to unveil the first part of Trump’s long-awaited Israeli-Palestinian peace plan.

A palace statement said Abdullah, who aides say has been deeply concerned about the plan, told Kushner Israel had to withdraw from the West Bank that Israel captured in the 1967 Arab-Israeli war.

Jordan is worried the plan could jettison the two-state solution that is backed by the United Nations and most countries around the world. The Palestinians want to establish a state in the West Bank, East Jerusalem and the Gaza Strip, all territory Israel captured in the 1967 war.

Jordanian officials have also been worried the plan would challenge King Abdullah’s religious custodianship of Muslim and Christian sites in Jerusalem. Amman has been particularly sensitive to any changes of status in Jerusalem after the Trump’s administration’s decision to recognize it as Israel’s capital.

Jordanian officials have also been worried by the U.S drive to dismantle the United Nations Relief and Works Agency (UNRWA) that provides services to about 5 million Palestinian refugees across Jordan, Lebanon, Syria and the West Bank and Gaza.

Jordan hosts the largest concentration of U.N.-registered Palestinian refugees. Officials have expressed concern that Trump’s peace plan would eventually pave the way for revoking the right to return for refugees in the kingdom.

Trump has touted the U.S. peace plan as the “deal of the century”, but the Palestinians have boycotted the Trump administration since it recognized Jerusalem as Israel’s capital and anticipate the plan will fall far short of their core demands.

“The deal of the century will not pass. Down with the U.S.,” chanted protesters who included figures from Jordan’s mainstream Islamist movement, the country’s largest opposition group.