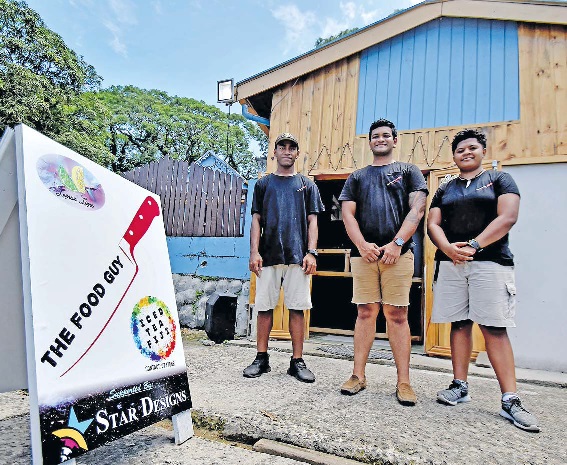 COVID-19 has pushed many tourism workers to venture into their own businesses and become entrepreneurs.

One such example is former chef Nicholas Jordan who now runs his own eatery The Food Guy located on Gordon St.

He said when COVID-19 first hit the country he moved back to the mainland after the Yasawa Island Resort closed down. Mr Jordan joined restaurants in the west and Suva gaining more experience and knowledge about the local demand.

“When COVID-19 hit, I moved back to the mainland and then worked in a restaurant in the West,” he said.

He said soon after he joined another high end restaurant in Suva which was a different ball game for him. Mr Jordan said amid his venture he had always harboured a dream of opening up his own place.

“It was always a dream, being a chef for about seven years in a resort, and moving up from the bottom of the kitchen rank up to an executive chef before COVID-19 had hit,” he said.

“A lot of people knew me and my food on the mainland, it was a growing thing. So I just needed to take the courage and do it. Mr Jodan started The Food Guy business in February delivering food to customers and it was only on November 19 when he opened his eatery. He said The Food Guy was based on him and the food he loved to eat or cook.

“So it’s based on me however I have a team behind me that helps me get things done. “They were ex-resort workers as well and they were island based.

“As COVID-19 hit, a lot of things changed and they didn’t want to go back so I brought them along and I’ve trained them for certain amount of time. “And then ever since then, they’ve been working for me, another group I got to meet while working together at different outlets and different restaurants.”

He said at the moment there were two staff members employed at the eatery however he was planning to hire more people as his business expands going into the new year.

“I plan to have seating areas, at the moment we’re running takeaway, our seating would begin going into the New Year.

“Coming back to the mainland, I just had a bit more freedom of doing a lot of other stuff and with opening up an outlet and running an online business, I had also developed two brands, which are beverage products.

“Those are ‘Iced Tea Fiji’ that was one of our beverage product and ‘Lemon Lime.”

He said these beverages were available at his place and certain outlets in Lautoka such as in service stations and small shops.

“Just doing all of those things just gave me a bit more confident being on mainland and like I said there’s a lot more left to come out for me.

“This is just to start and once we get seating areas arranged then we’re most likely venture towards different styles of food.”

The Food Guy outlet in Suva has a lunch and dinner menu, offering seafood, chicken and beef dishes. Mr Jordan said their main dish was fried chicken which was the most popular.

He added they were bringing a lot of different things to their eatery for their customers to enjoy.

“We also have a bit of seafood as well, as we get it fresh, we had lobster few weeks ago, which sold out like hotcakes.

“So anything fresh, I can get hold off I put it on the menu and we use it from there, we had a big hit, which is our octopus dish.

“Every week I go down to the market and have to look for octopus.”

“So there’s this sauce that I made that everybody enjoyed when they first tried my food.

“So four variations of a fried chicken and we have more to come,” he said.

Mr Jordan said he had invested around $10,000 into the restaurant and there were more expansion plans yet to come. T

he eatery opens at 10am and late into the evening according to Mr Jordan.