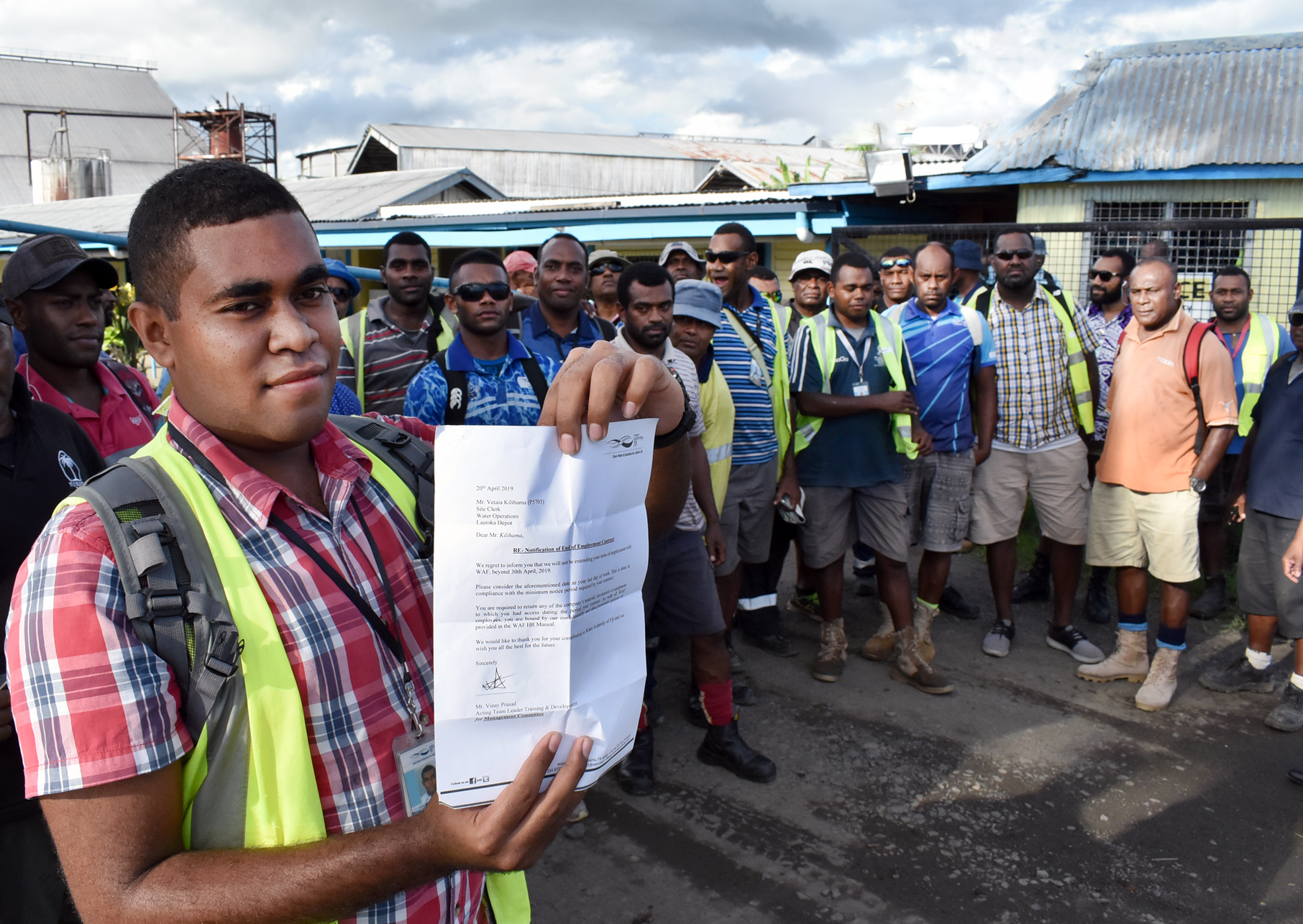 Some of the Water Authority of Fiji workers who were given termination letters at he Lautoka Depot. Picture BALJEET SINGH/FILE

THE National Union of Workers (NUW) claims about 2900 Water Authority of Fiji employees across the country will lose their jobs in a mass termination on May 1.

NUW national secretary Felix Anthony claimed the terminations would involve 600 permanent workers and about 2300 who were employed on contract.

“Our members have informed us that they have received termination letters beginning yesterday (Thursday April 25) and the remainder will receive them today (Friday) – this is unprecedented and a blatant disregard of workers’ rights and their family’s welfare,” he said.

“Our members will turn up for work on Wednesday, May 1 and if they are locked out then we will have a serious issue.

“We will not tolerate any unfair and unilateral action by WAF in this regard.

“There is a collective agreement, there is due process that must be followed.

“These are not workers who are on hefty salaries who can just go home and wait until the next job – they are ordinary employees who live week to week.

“We are talking about families and their survival and we are calling on WAF and the Government to act responsibly.”

This newspaper spoke to a number of workers who received termination letters at WAF’s Lautoka Depot yesterday. None wanted to be identified. One said he was the sole breadwinner in his family, his wife was unemployed and his seven children relied on his income for their survival.

“I don’t know what’s going to happen from next Wednesday because I will be out of a job,” he said. “I have been working at WAF for three years and before that I did not have a job.

“I know how hard it is to find work.” Another said his wife and two daughters’ survival depended on his job.

“My wife and one daughter are very sickly,” he said.

“I have been working at WAF for seven years and this is the only job where I have been able to provide good food and medical care for my family.

“Now I don’t know what will happen.” WAF board chairman Bhavesh Kumar Patel refuted the claims made by Mr Anthony.

“It is a fact that WAF is going through a restructure and the authority will finalise its employee numbers shortly,” he said in response to queries from this newspaper.

The interpretation of the provisions of the collective agreement by the union is an issue before the Arbitration Court and it would not be fair to make any public comment regarding the same at this stage.”