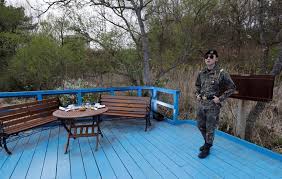 A South Korean soldier stands on the blue bridge ahead of a ceremony to mark the first anniversary of Panmunjom declaration between South Korean President Moon Jae-in and North Korean leader Kim Jong Un which was held in April 27, 2018, at the southern side of Panmunjom in the Demilitarized Zone, South Korea, April 27, 2019. Lee Jin-man/Pool via REUTERS

GOSEONG, South Korea (Reuters) – Along forest trails below a bare mountain peak that until last year was a vantage point for a North Korean guard post, a group of around 20 ordinary South Koreans took a rare hike on Saturday near the Demilitarised Zone (DMZ) separating the two Koreas.

The hikers were chosen by lottery to explore a “peace trail” near the heavily fortified frontier, launched to mark the first anniversary of a landmark summit between South Korean President Moon Jae-in and North Korean leader Kim Jong Un.

Hours later at the Joint Security Area (JSA) in the border village of Panmunjom, where Moon and Kim met, a series of music performances and other events were held to highlight cross-border rapprochement fostered since the summit.

But conspicuously absent from the peace-themed celebrations was North Korea, which failed to send any official or message in response to the South’s invite.

North Korea has effectively pulled back from engagement since a second meeting in Hanoi in February between Kim and U.S. President Donald Trump fell apart without any agreement on dismantling Pyongyang’s nuclear program.

In the South, Moon’s administration is forging ahead with its peace drive without it.

The trail hiked on Saturday, dubbed the DMZ Pathway to Peace although it does not enter any part of the zone, was introduced after the North refused to implement an agreed plan to provide tourists from both sides with greater access to the JSA.

Public access to the area was strictly limited as the two Koreas remain technically a war because the 1950-53 Korean War ended in a truce, not a peace treaty.

“I wish I could freely go down this road into the North,” said Song Hae-sook, a 71-year-old hiker. “It’s too bad that they’re not keeping their promise, which is what always worries us.”

The failed Hanoi summit was a blow for Moon, who has offered to mediate between Kim and Trump for a deal that he hoped would help ease U.S. sanctions in return for the North taking steps toward denuclearisation, leading to a restart of inter-Korean economic cooperation.

Moon’s efforts to meet Kim again and send an envoy to Pyongyang to discuss a possible compromise after the breakdown have made little headway.

Planned weekly talks at an inter-Korean liaison office in the North’s border city of Kaesong have not taken place since the Hanoi summit, and the North briefly pulled out of it without giving a reason.

“It may look like a bride walking down the aisle when there’s no groom waiting from the other side to greet her,” a South Korean official said, speaking on condition of anonymity due to the sensitivity of the issue.

“But many in the Blue House would just be happy as long as the soldiers keep finding some remains from the DMZ.”

Unification Minister Kim Yeon-chul expressed regret over the North’s absence, but requested understanding citing the “change of the situation”.

“But it isn’t less meaningful for us to once again reaffirm our resolve to implement the agreement made in Panmunjom through these events,” he told reporters during a rehearsal for the celebration on Friday.

The DMZ tourism plan was part of a military pact, sealed during a September summit in Pyongyang, which calls for a set of tension-defusing measures.

Both Koreas implemented some steps last year, halting major military drills, setting a no-fly zone around the border and removing landmines and guard posts within the DMZ, including the mountaintop watchtower above the “peace trail”.

But the North snubbed the South’s proposal last month for talks to discuss follow-up action. This month, the South began excavating the remains of soldiers missing from the war from the DMZ on its own.

Moon’s unfazed push for peace has triggered worries that Seoul may be moving faster than anyone else is prepared to. U.S. officials have openly said since last year that inter-Korean relations should keep pace with progress on the North’s denuclearisation..

Marking the anniversary of the Panmunjom summit, the North’s state media released a series of articles on Saturday blasting the South’s “submissive” alliance with the United States, which it said tries to “interfere” in inter-Korean ties, and urging Seoul to “take a proper stand”.

“North Korea is expressing discontent and disappointment after the South raised hopes for a deal but then failed to deliver as a ‘mediator’ eventually,” said Hong Min, a senior fellow at the Korea Institute for National Unification in Seoul.

Saturday’s ceremony was titled “Long journey”, which Moon’s office referred to a “path that is long but must be taken” until lasting peace is established on the Korean peninsula.

“This is a new path, and as we all must take it together, we need, sometimes, to wait for those moving slower to catch up,” Moon said in a video message, conveying his greetings to Kim.