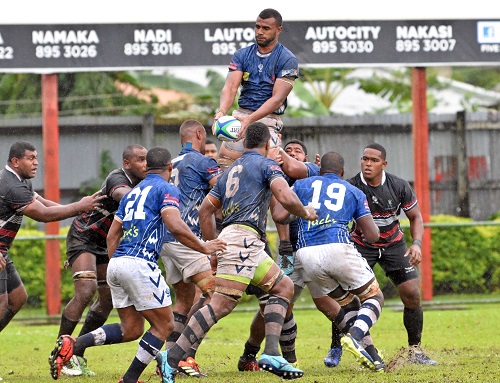 The coveted Farebrother trophy is now at its new home in Nadi after Jack’s Nadi overcame title holders Naitasiri 14-10 in a close encounter during the opening 2019 Farebrother Cup challenge match at Ratu Cakobau Park in Nausori yesterday.

Nadi coach Ponijese Lutudina was lost for words when the final whistle blew ending the game. “On paper we couldn’t beat them,” Lutudina said.

“We played to our strengths and our boys delivered,” Nadi went one over Naitasiri this time around last challenging for the rugby silverware four years ago.

Naitasiri looked to establish control early with number eight Inoke Tuisese crashing over for the their first points after multiple phases nine minutes in with flyhalf Kini Douglas converting.

Naitasiri looked set to run away with a second try when a floated pass from Douglas was intercepted by Nadi outside centre Aminio Naseyara to race away for a 40-metre try untouched.

Both teams headed to the tunnel locked at seven-all.

Tension flared in the second spell as both teams jostled for the upper hand.

Douglas furthered the gap with a penalty kick 30 metres from the pavilion side of Cakobau Park.

But the turn in the tide came midway in the second half when a lapse of concentration showed a chink in the Naitasiri armour which had been strong all game long.

Impact players of the Nadi bench showed a timely inclusion with Fiji Warriors star Tuidraki Samusamuvodre breaking away from midway only to be bought down five metres from the line.

The Nadi pack quickly secured the ball to Varo who with a precise crosskick found open-side wing Jiutasa Nave who reclaimed the highball and crashed over for the winner with Varo converting from the corner.

Jack’s Nadi will defend the Farebrother trophy next week against BLK Nadroga.