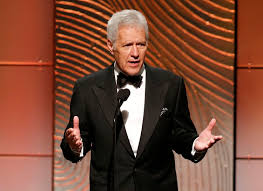 (Reuters) – Alex Trebek, the long-time host of television game show “Jeopardy!” and one of U.S. television’s most recognizable personalities, said in an interview published on Wednesday that doctors have told him that his deadly pancreatic cancer is now “near remission.”

The 78-year-old Canadian-born host revealed in a video in March that he had been diagnosed with stage 4 pancreatic cancer, but vowed to beat the disease despite its low survival rate.

“It’s kind of mind-boggling,” Trebek said in an interview with People magazine. “The doctors said they hadn’t seen this kind of positive result in their memory … some of the tumors have already shrunk by more than 50 percent.”

Stage 4 typically means the cancer has spread to other parts of the body, and the five-year survival rate for such advanced pancreatic cancer is 3 percent, according to the Pancreatic Cancer Action Network.

But Trebek said he has been responding very well to chemotherapy, according to the magazine.

“Jeopardy!,” which Trebek has hosted since 1984, is among the most watched quiz shows in the U.S. and Canadian television markets.