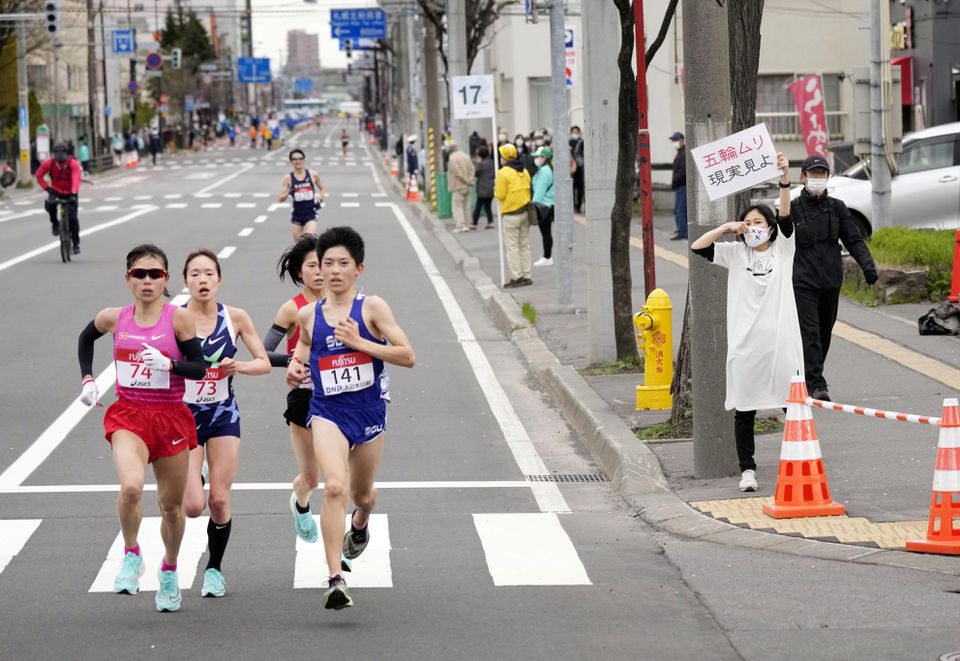 A spectator raises a paper sign reading 'It is impossible to hold the Olympics, face up to reality' along the race route during the half-marathon as part of Hokkaido-Sapporo Marathon Festival 2021, a testing event for the Tokyo 2020 Olympics marathon race, amid the coronavirus disease (COVID-19) pandemic, in Sapporo, Hokkaido Prefecture, Japan May 5, 2021, in this photo released by Kyodo. Kyodo/via REUTERS

When Olympics organisers shifted the marathon event from Tokyo to the northern city of Sapporo, they did so because of concerns about the intense summer heat in the Japanese capital.

Two years down the track, critics say organisers have effectively leapt from the frying pan into the fire.

Sapporo is currently under a COVID-19 state of emergency amid a resurgence in coronavirus infections.

Officials in the city say they still don’t have key information, including the number of athletes to expect and details on health facilities, while opposition from residents to hosting part of the world’s biggest multi-sporting event has grown.

“There’s no action yet,” said Takashi Okugi, a Sapporo city official in charge of Olympic preparations. “We don’t have enough time.”

With less than two months to go, Hokkaido, the northernmost island where Sapporo is the main city, has the second-highest per capita COVID-19 rate in Japan, about 43% higher than that of Tokyo. Sapporo, which has a population of just under 2 million people, accounts for almost two-thirds of new cases.

City officials and residents are nervous about the influx of athletes and support staff at a time when the city’s medical system is already stretched.

Okugi said officials have made repeated requests to the Tokyo 2020 Organising Committee seeking essential details on issues including which hospitals would be designated to treat any infected participants.

“So far a lot of answers that we are hearing are like no decision yet or still under consideration,” Okugi said. “Without a clear structure, we can’t figure out yet how much the city’s medical system can be affected so we want information from the organising committee quickly.”

The Tokyo 2020 Organising Committee said about 340 athletes planned to participate in the marathon and race walking events in Sapporo, but the number of staff and officials involved in the Sapporo competitions was currently under review.

“We will continue to strive for the understanding and support of local residents through clear and careful communication,” the committee told Reuters by email, adding that it holds working group meetings with Sapporo and Hokkaido officials every four to six weeks.