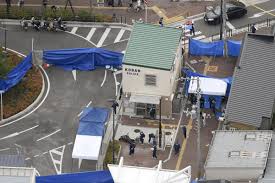 An aerial view shows police officers investigating the site where a police officer was found stabbed in front of a police box and the officer's gun, loaded with several bullets, was stolen, in Suita, Osaka prefecture, western Japan June 16, 2019, in this photo taken by Kyodo. Mandatory credit Kyodo/via REUTERS

TOKYO (Reuters) – A Japanese police officer was stabbed several times in the chest with a kitchen knife and his loaded handgun stolen while on patrol on Sunday morning in the western city of Suita, in a rare case of violent crime in Japan, public broadcaster NHK reported.

The attack, which police believe may have been pre-meditated, sparked a manhunt with police using loudspeakers at a railway station to warn people to be on alert.

The stabbing comes two weeks before Japan hosts a leaders’ summit of the Group of 20 major economies in the neighboring city of Osaka. It also follows an incident last month in which a knife-wielding middle-aged man killed a girl and an adult, injuring another 17 people near Tokyo.

Violent crime is relatively rare in Japan but occasional high-profile incidents have shocked the nation.

“It’s scary that handgun was stolen. I want this to be resolved quickly,” a male neighbor said.

“A kindergarten’s open day was canceled due to this incident. My kids cannot go out. It’s scary,” another man said.

The 26-year-old police officer was found lying on the ground with a kitchen knife stabbed in his left chest around 5:30 a.m. Sunday (2030GMT), reported NHK.

He was attacked in front of a police box as he likely followed two officers after a telephone call reporting a theft.

Police suspect the attack may have been pre-meditated as there was no theft and a security camera showed a man, who appeared in his 30s, hanging around the police box about an hour before the stabbing, said NHK.