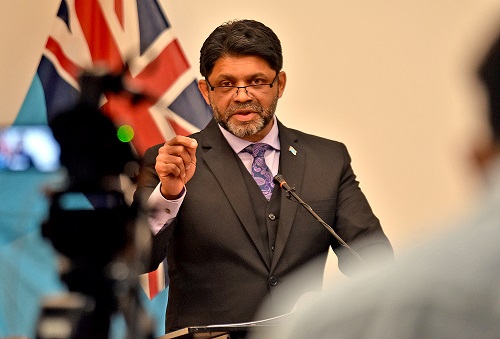 Attorney General and Minister for Economy Aiyaz Sayed-Khaiyum speaks to the media during a press conference at the Ministry of Economy office at Ro Lalabalavu House in Suva on Thursday, August 18, 2022. Picture: JONACANI LALAKOBAU

Japanese investors were in the country for possible investments in the renewable energy sector.

While speaking in Sigatoka recently, Minister for Economy Aiyaz Sayed-Khaiyum said the team of experts were interested in setting up a mini hydro plant.

“We advertise internationally for divestment opportunities in our energy company, which is what used to be called Fiji Electricity Authorities now called EFL,” he said.

“We corporatised it a few years ago, gave it in increased levels of independence and then we went through an international tender process.

“Within less than two years, they were able to make a huge killing on it.

He said interest from other foreign investors was increasing.

“Getting back to EFL, we are very excited about that.

“There’s already a team of about six or seven Japanese experts we met last week who were in the country looking at it and various other renewable opportunities in Fiji.”

He said this would also give Fiji a cleaner footprint.

“I’m also highlighting this apart from the national objective; that as a business who may be investing in Fiji it gives you the edge in that you could be generating or producing goods from renewable energy sources.

“It gives you that edge in respect of being able to market your produce your products, your particular properties, et cetera.”