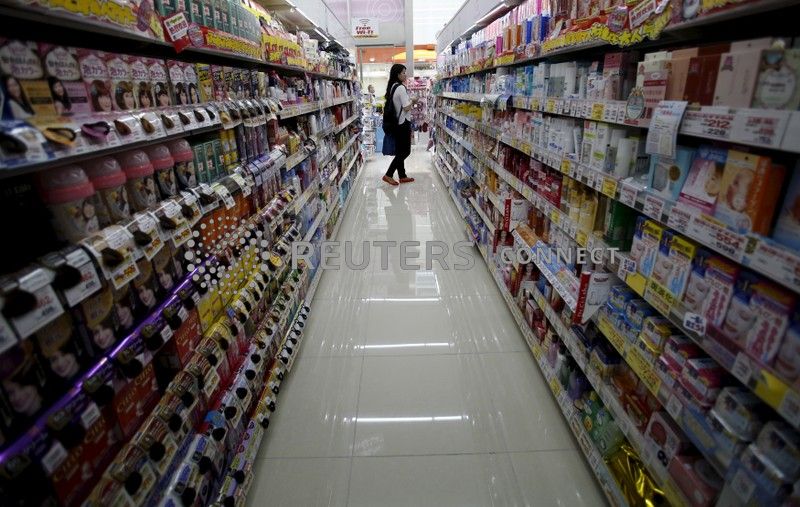 FILE PHOTO: A shopper looks at items at a drug store in Tokyo, Japan, May 28, 2015. Japan's core consumer prices rose 0.3 percent in April from a year earlier, government data showed on May 29, keeping inflation distant from the central bank's 2 percent target. Picture taken May 28, 2015. REUTERS/Yuya Shino

Analysts, however, expect such pressures to remain more modest in Japan than in the United States, as slow rollouts of vaccines to combat the coronavirus pandemic are seen weighing on Japanese domestic consumption.

The corporate goods price index (CGPI), which measures the price companies charge each other for their goods and services, rose 1.0% in March from a year earlier, Bank of Japan (BOJ) data showed, the first rise in 13 months.

The jump, which was at the fastest pace since January 2020, exceeded a median market forecast for a 0.5% increase and followed a 0.6% fall in February.

Most of the gain was driven by a 29% spike in prices of non-ferrous metals goods and 9.8% rise in those for oil products and coal, showing how a rebound in global demand for commodities pushed up costs for Japanese firms.

Compared with a month ago, wholesale prices jumped 0.8% in March to mark the biggest gain since October 2019.

“The increase is driven mostly by recoveries in U.S. and Chinese economies, which are pushing up global commodities prices, rather than a rebound in domestic demand,” said Shigeru Shimizu, the head of a BOJ division overseeing price moves.

“It’s too early to say price levels have fully returned to pre-pandemic levels,” he told a briefing.

Japan’s economy has emerged from the initial hit of the pandemic thanks to robust exports. But analysts expect any recovery to remain modest with a renewed spike in infections clouding the outlook for domestic demand.