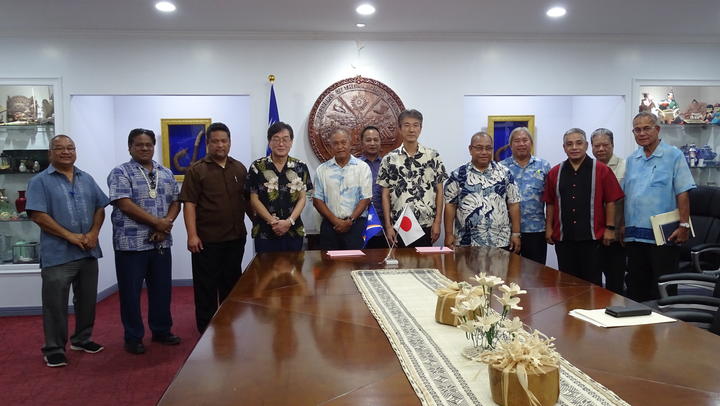 One of the largest ever Japan development projects for the Marshall Islands will inject nearly $US17 million to expand Majuro’s water storage capacity by 40 percent – a project that has been in limbo for over 15 years, despite strong support of both governments.

On Thursday, the long-desired and awaited project was signed into reality by Japan Ambassador Norio Saito and Marshall Islands Foreign Minister Casten Nemra.

Japan is to spend approximately $US16.7 million for improvement of the water reservoir system in Majuro.

The Project will be implemented by Japan International Cooperation Agency together with the Ministry of Works, Infrastructure and Utilities and Majuro Water and Sewer Company. The signing ceremony was joined by President David Kabua and numerous Cabinet ministers.

The new water project will add 15 million gallons of storage capacity, bumping the reservoirs from their current 36 million gallon capacity to over 51 million. The new reservoir is to be built next to existing reservoirs by Amata Kabua International Airport.

Fresh water supply through the government’s city water system was routinely rationed to a few hours three days per week.

During periods of drought, water hours were further reduced as fresh water supply dwindled. Majuro’s population of about 30,000 depends almost entirely on rain for its fresh water.

Saito said it was Japan’s pleasure to contribute to water security of Marshall Islands. He referred to Japan’s stated commitment to strengthen support for resilient and sustainable development in this region at the eighth Pacific Leaders Meeting held in Japan in 2018.

Japan was keeping its words of promise to the Marshall Islands and the region with a project of this nature, he said.

Foreign Minister Nemra extended the government’s appreciation to Japan for the long-awaited project.

Both speakers talked about the solid, long-term ties between the two nations continuing to strengthen as a result of ongoing cooperation.