Japan, hit by torrential rains, orders over one million to evacuate 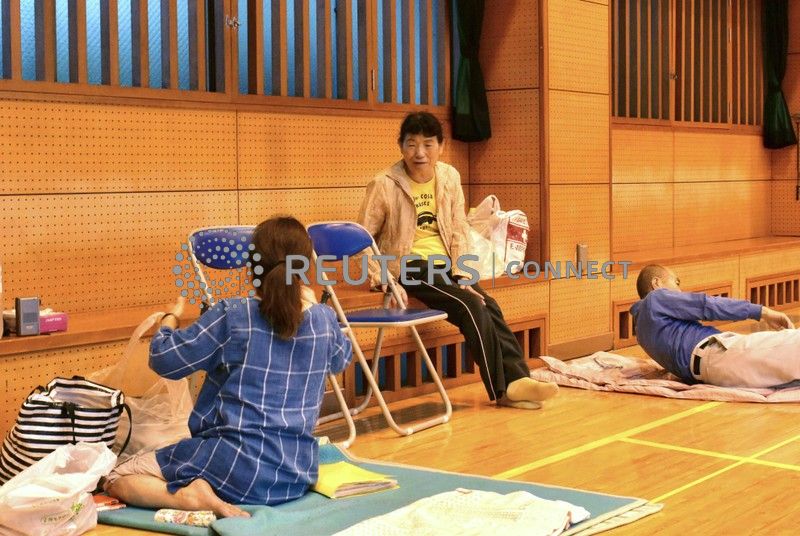 Local residents take a rest at a shelter in evacuation centre as heavy rains threatened to trigger landslides and cause other damage, in Kagoshima, Japan, July 3, 2019, in this photo taken by Kyodo. Mandatory credit Kyodo/via REUTERS ATTENTION EDITORS - THIS IMAGE WAS PROVIDED BY A THIRD PARTY. MANDATORY CREDIT. JAPAN OUT. NO COMMERCIAL OR EDITORIAL SALES IN JAPAN.

TOKYO (Reuters) – Japan ordered more than one million people on the southernmost island of Kyushu to take shelter in evacuation centers and other safe areas on Wednesday as heavy rains triggered small landslides and threatened to cause widespread flooding.

Some parts of southern Kyushu have received over 1,000 mm (39.4 inches) of rain since Friday, about as much as usually falls in the whole month of July, broadcaster NHK said.

Forecasters expect as much as 300 mm more rainfall in some areas by Thursday evening.

Evacuation orders were issued for 1.1 million residents of Kagoshima and Miyazaki prefectures at the southern tip of Kyushu, NHK said. Some 930,000 more were advised to leave.

“I live alone next to a river, and it’s scary to think of water rising,” one woman in an evacuation center told NHK. Another person said the volume of rainfall was “terrible”.

Television footage showed rivers filled with fast-moving brown water, but none had overflowed their banks as of Wednesday evening, although one low dike had broken and efforts were being made to repair it with sandbags.

Several small landslides were reported, including one that swept away two cars and damaged a pre-fabricated shed. A mother and child in another car swept away by a landslide sustained minor injuries.

“The rain was just flowing all over the rice fields,” one woman told NHK.

A Twitter user posted a photo of a road covered with brown water. “Whoa, the road I take to work is a mess,” the user wrote.

In Tokyo, Prime Minister Shinzo Abe said residents should “take steps to protect their lives, including early evacuation,” and he ordered the military to prepare for rescue operations.

Abe was criticized for the government’s slow response in July a year ago, when heavy rains triggered landslides and floods, killing more than 200 people in Japan’s worst weather disaster in 36 years.