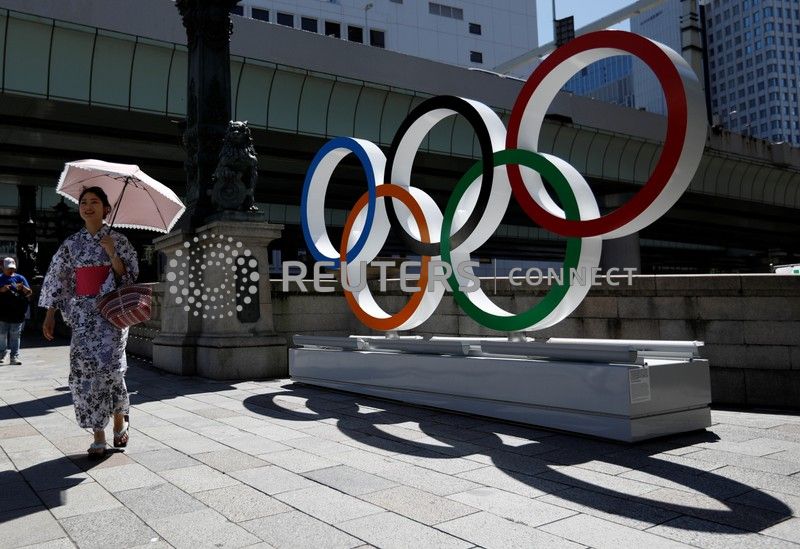 TOKYO (Reuters) – Japanese firms are overwhelmingly expecting the economy to contract after the 2020 Tokyo Olympics following growth in the run-up to the event, prompting a call for fresh fiscal stimulus to support a fragile economy, a Reuters poll showed.

Growth in the world’s third-largest economy has slowed to a crawl in the last quarter as the U.S.-China trade war and global slowdown undermined the export-led economy. Many market players bet the economy will contract in the current quarter, as consumption takes a hit from the sales tax hike to 10% from 8% starting on Oct. 1.

Analysts polled by Reuters last month expected the economy to shrink 2.5% in October-December, rebound 0.6% in the first quarter, then accelerate towards 1.2% annualised growth in the July-September quarter, during which Tokyo hosts the Olympics.

The growth rate is expected to halve in the final quarter of 2020.

The Reuters Corporate Survey found Japanese firms have a gloomier outlook of the economy, with 65% of respondents expecting the economy to contract after the Olympics. That could signal weaker business spending and investment than markets see.

Some 65% also urged the government to compile fresh economic stimulus to underpin a fragile economy after the 2020 Olympics.

“The economy is already in recession. There’s a risk of private consumption falling sharply after the Olympics,” a manager at a transport equipment maker wrote in the survey.

“An economic boom triggered by the Olympics may help avoid a slump temporarily. Without some kind of stimulus, things could cool across all sectors,” a manager at a ceramics manufacturer wrote.

The calls for fresh stimulus steps come even as the government is already set to roll out an economic spending package of about $120 billion to support the economy and build infrastructure to cope with big natural disasters.

Including private-sector and other spending, the package would come to around 25 trillion yen ($230 billion).

Since Prime Minister Shinzo Abe swept to power in Dec. 2012, the three “arrows” of his Abenomics policy mix of monetary easing, fiscal spending and structural reforms have helped boost the size of the economy.

But the positive momentum has quickly faded, while years of massive monetary and fiscal stimulus have failed to spur inflation to the Bank of Japan’s 2% target, leaving policymakers with little ammunition to fight the next recession.

Asked about the most desirable stimulus step, public works were the most popular choice, picked by 30% of respondents, followed by income tax cuts, tax breaks for capital expenditure and human capital investment in information technology and artificial intelligence, the survey showed.

Additional monetary easing was the least popular, chosen by just 3%, followed by payouts to low-income earners.

A manager at a transport equipment manufacturer saw no need for stimulus saying it was a crutch that could have consequences in the future.

“Once you try to avoid it, the economy will need a shot in the arm repeatedly,” he wrote.

The survey, conducted from Nov. 20 to Dec. 2 for Reuters by Nikkei Research, canvassed 502 big and midsize non-financial companies. Roughly half responded to questions on the economy, on condition of anonymity, so they can express their opinions more freely.