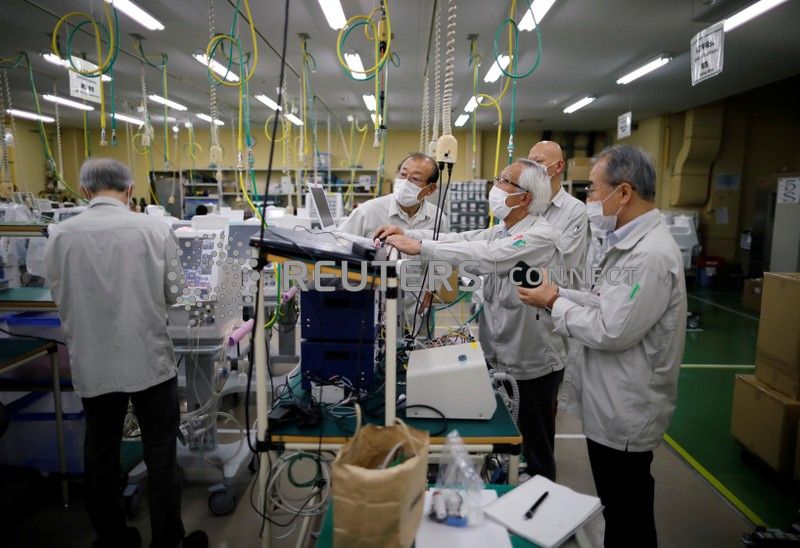 Employees of Metran Co. check the company's 'Compos X' ventilator, which was originally developed for animals but may be used for human coronavirus disease (COVID-19) patients, at their factory in Kawaguchi, north of Tokyo, Japan April 2, 2020. Picture taken April 2, 2020. REUTERS/Issei Kato

KAWAGUCHI, Japan (Reuters) – A Japanese medical equipment maker said it has been approached by Japan’s government to mass produce its animal ventilators to treat people diagnosed with the new coronavirus, and that other countries have also expressed interest.

Metran Co Chief Executive Kazufuku Nitta said the approach was made late last month and that the United States, Britain and India are among over 30 countries the company is talking to.

Ventilators, which assist patients struggling to breathe, are in short supply in many countries hardest hit by COVID-19, the pneumonia-like disease caused by the coronavirus.

In the United States, medical equipment makers said they would simplify ventilator designs and push other work aside to increase production, while automakers have also offered to make the devices. Elsewhere, Swiss manufacturer Hamilton Medical AG said Britain faces a “massive shortage” of ventilators.

Privately held Metran also makes ventilators for humans, but Nitta said its veterinary devices are simpler and so are a tenth of the cost to produce and easier to operate.

“In a pandemic, there won’t be enough doctors with expert knowledge on site,” Nitta told Reuters in a recent interview at Metran’s factory in Kawaguchi, north of Tokyo. “A simple and a safe machine is needed for doctors who are not familiar with the device.”

The number of new coronavirus cases continues to climb in Japan, stoking concern about strain on the nation’s healthcare system. More than 3,500 people have tested positive for the virus in Japan – with over 1,000 in Tokyo – and 85 have died, public broadcaster NHK reported.

On Friday, the government ordered regions suffering the most serious outbreaks to save hospital beds for severely ill patients.

Prime Minister Shinzo Abe told parliament that his government had secured over 8,000 ventilators necessary to treat patients in serious condition.

Metran is considering a system for producing 5,000 to 15,000 animal respirators, Nitta said, without providing a time frame.

He nevertheless expects demand to outpace that, so is also considering licensing the product for overseas firms to manufacture.