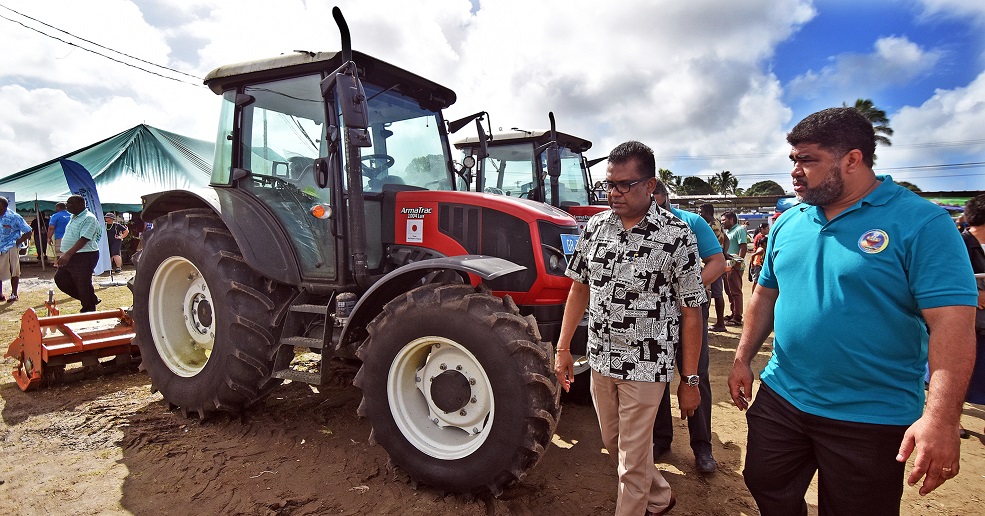 Permanent Secretary to PM's office Yogesh Karan (left) hands over the tractor to the PS of Agriculture David Kolitagane (right) during the 2019 Agriculture Show at Valelevu grounds yesterday. Picture: RAMA

THE contribution of nine tractors, four excavators and chainsaws from the Japanese government through its grant aid program is expected to boost agricultural productivity for farmers in the country.

Officiating at the handover of five tractors to the Agriculture Ministry yesterday, permanent secretary to the Office of the Prime Minister, Yogesh Karan, said four of the nine tractors had been handed to Fiji Rice Ltd on Vanua Levu to assist rice farmers in Dreketi.

Mr Karan said from 2010 to date, the number of requests for land preparations had reached more than 15,000.

“These five tractors will surely assist farmers in the timeliness of their land preparation which will obviously result in an increase in production that will address food and income security. Also, it will encourage more young farmers to participate in agriculture and these five tractors are also scheduled to boost production and increase export.”

Mr Karan said Japan had been a steady development partner for Fiji.

Agriculture Ministry permanent secretary David Kolitagane said the machines would bring much needed assistance to farmers in the country.