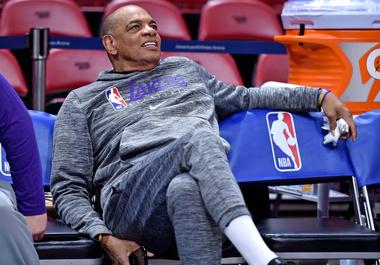 LeBron James compiled 28 points, 12 assists and nine rebounds while leading the visiting Los Angeles Lakers to their sixth consecutive victory, a 113-110 decision over the Miami Heat on Friday night.

The Heat, trailing 112-110 with 8.1 seconds left, couldn’t rebound a missed free throw by Kentavious Caldwell-Pope. After another foul and one more Caldwell-Pope free throw, Miami’s Jimmy Butler missed a 3-pointer at the buzzer that could’ve forced overtime.

Anthony Davis also starred with a game-high 33 points, 10 rebounds and three blocks for the Lakers, who earned their 13th consecutive road win.

Butler, the reigning Eastern Conference Player of the Week, had a team-high 23 points, but his Heat lost at home for the first time this season, falling to 11-1 at AmericanAirlines Arena. Miami had won six of its previous seven games.

James, who leads the NBA in assists and is essentially Los Angeles’ point guard at 6-feet-9 and 250 pounds, also committed eight turnovers in his return to Miami.

Before the game, he and retired star Chris Bosh shared an embrace. Bosh, who had a courtside seat, was one of James’ teammates when the Heat won NBA titles in 2012 and 2013 and reached the Finals in 2011 and 2014.

Before the game, Miami suspended guard Dion Waiters for the third time this season. Waiters, who is owed $24.7 million over this season and next, has yet to play in this campaign.

Los Angeles was without forward Kyle Kuzma (left ankle) for a second straight game, but backup point guard Rajon Rondo (hamstring) returned after missing two consecutive contests. He had no points and four assists in 25 minutes.

There were five lead changes and four ties in a tight first quarter that finished with the Lakers on top, 30-29.

In the second quarter, Miami led by as many as 14 points before settling for a 59-51 advantage at the break.